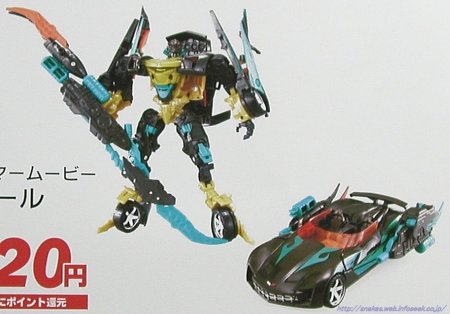 Takara known with their sneaky ideas of releasing obscured store exclusives only known to their locality repeating it again for Transformers Dark Side Moon. Along with other line ups known domestically to them such as Arcee, Vortex and Skywarp, they are coming up with Dark Steel.

Thanks to Snakas / Autobase Aichi, who revealed an advertisement for a new Bic Camera, we now have an image of Dark Steel who is retooled and redecoed from DOTM Autobot Sideswipe.

His head is most noticeable as he comes with a brand-new Cobra-like head. His MechTech weapon will be the one where Starscream is using. 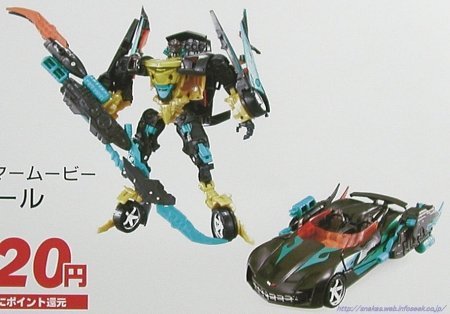 Dark Steel will be a Bic Camera Store exclusive, while for mass releases in the Hasbro states side it will be known as Dark Iron.

Dark Steel will be aligned to the Decepticon and if you realise, this paint scheme black and teal, is a homage to Beast Wars Quickstrike, a Predacon Fuzor of scorpion and cobra. 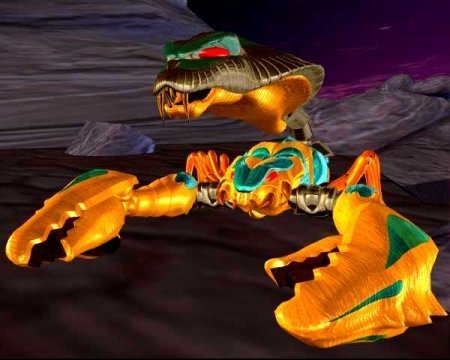 Since Dark Steel is a Takara exclusive, it is possible that there will be some differences between the ones from Hasbro and Takara.

Dark Steel, is slated for release on September 23rd in Japan and pre-order for this figure will be available starting August 16th 2011.