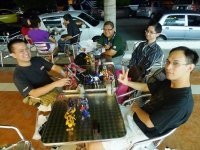 TransMY did not get involved in any events until 2007, that is 4 years after its founding. During our infancy in that 4 years, we are only active online and our activities are 100% online.

After the media noticed us in 2007, we embarked in a presence offline, away from the virtual world where real people among fans teamed up to execute some of the most important event projects.

Apart from that, our activities also revolves around more casual stuff such as unofficial meetings among fans in public places such as eateries or malls. We call them ‘yumchar’ sessions. For a list of stuff we do, here goes:

The expo and toy fair that we have been involved are as follows;

The movie premiere that we have been attending so far:

The official gatherings that we have organised so far:

Penang chapter meet up every month, usually on the second Saturday of the month.

Feel free to join us in any one of those chapters!