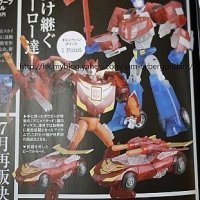 Tformers has released a confirmation that the second of four releases celebrating TakaraTomy’s Welcome to Transformers 2010 campaign is the Transformers Animated Clear Optimus Prime and Rodimus! Dubbed “Sons of Cybertron” the figures are set for a July release with a 4,725 Yen (~$52 USD) pricetag.

The magazine also shows off the third piece of the campaign, Toy Hobby exclusive Unicron. The campaign kicks off late next month with the release of MP04S Convoy Sleep Mode. 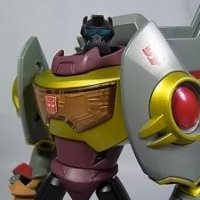 Tagged as TA-17, this Grimlock is really gorgeous in metallic compared to the overseas versions. The unit comes with a robust package. The bio stories of the package, the G1 is not it really reminiscent.

It became the latest design almost perfectly biologically but the figure is rather slouching. The monster-like image has played well the G1 Dinobots tribute. Minute by pressing the button on the neck will activate mouth opening action.

The shape of the eyes, gave you the feel of Grimlock’s cruelty. It have good joints where the figure the standing is okay. But moving to a strict form of indirect crotch, it is a strict kneeling. If you move the impossible, or too likely to loose a bit of a waste and moving it into force. The stiffness of the joints have you think so much, as you know yourself that overseas versions are happier to get this?

Magma sword is really good. Stipe shape, it can hold hands inserted into the hole part and shed light, where he seems to burn correctly. The figure have been brightly painted, I think you can feel that strength. This figure is fun. 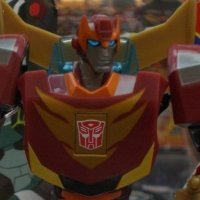 We’ve had a lot of rumors this month, and another one has come out of the pipes. While rumors tend to bring happiness along with them, this one has the opposite effect. We regretfully inform everyone that Hasbro might have just shut down the Transformers Animated toy line for good. As reported by TFormers, one of their members got a response from Hasbro in regards to Transformers Animated inquiries. This was the response.

Thank you for contacting Hasbro, Inc. regarding the Transformers Animated Blackout and Thundercracker. We appreciate your interest in our company and products. Regrettably, both products have recently been discontinued. We are, therefore, unable to assist you in identifying retail markets which may still have this product in inventory nor do we have any available for direct sale. Although they are no longer in our current product line, you may still be able to find them in retail stores. Some of the retail stores that carry Hasbro products include Toys R Us, Wal-Mart, Kmart, and Target. We apologize for any inconvenience. We hope you and your family will enjoy Hasbro products for many years to come.

The remaining Hasbro Animated figures are listed below.

Whether there is truth to this rumor or simply a misunderstanding, we’ll be the first ones to update everyone on the official confirmation 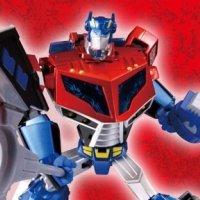 With the release of Transformers Animated under Takara’s jurisdiction this weekend, those shiny and metallic figures might be arriving on your door step shortly. 25 individual figures and 5 box sets are set to be released this upcoming weekend and continuing throughout the month of April.

For those who happen to have forgotten just what those figures exactly look like, take a look at them here, pictures courtesy of E-hobby. 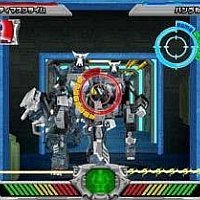 The Tokyo International Anime Fair happening on March 25, 2010 will include a preview of the Transformers Animated Japan games from Sega in Japan. The two games named (translated) are “Chase Animated Transformers” and “Animated Shooting Transformers.” The screen shot shows this to be a first person shooter type game.

Check out more details from the following that was auto-translated using Google Translate: Big game company Sega, March 25 from the Tokyo International Anime Fair will be held four days over the 2010 Transformers Animated to commercial debuted on the theme of the game. Card game for kids, “Chase Animated Transformers” and “The Animated Shooting Transformers” is two.

“The Chase” We beat the enemy transformers handle runaway operation, and “The Shutin” In defeat the enemy through the transformer cancer, go to clear the stage. Start up of the game is scheduled for this summer, rates have been played here yet.

Any games that target the core layer and the boys. The combination of good at card games and Sega, the new game to appeal to children.

The enclosure will be unveiled this new game is set up in the venue of the fair was established Transformers Animated Transformers Anime is in the booth. Has been possible to actually play the game at the venue. It can be deployed ahead of the summer and early experience.

Transformers Animated is on every Saturday morning from 8 Sun, including broadcast TV Aichi and TV Tokyo from the time, since June is also shown on Channel Kids Station animation expert. Takara Tomy is planning to expand this tailored to a wide range of toys.

Popular Transformers brand abroad mainly Western, such a strong toy sales, suggests that the goal was achieved in Japan. General Anime Fair open to the public March 27 to Sun, the Takara Tomy Transformers to Animated 11 is expected to release a toy library. TV, toys, games and DVD for business that there is a release of BD.

“Transformers” is based on the development of Tomy toys is the view of the world’s created a character and world view of the U.S. toy company Hasbro. TV animation, made in the U.S. so far has been made and several made in Japan.

Among those Transformers Animated is the latest in U.S. production. Animated toys and a fusion of Japan and the U.S., it might be interesting if the kids accepted the game. Read the original post in-language at animeanime.jp. 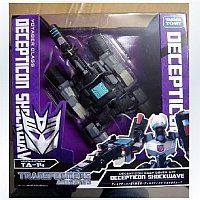 In this auction, we get to see the first in package image of the Decepticon spy. Takara version Animated Shockwave is scheduled to be released on 24th April 2010. 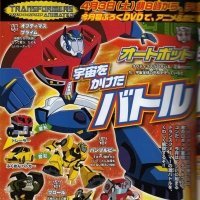 The latest edition of TV Magazine (aka Terebi-Kun or TV Boy) in Japan has been released, with a bonus DVD containing further information on the Japanese release of Transformers Animated. The DVD takes the form of an introductory tale told by Optimus Prime, introducing the main characters.

Of particular interest are some pieces of information from Masahiko Yamazaki, a marketing officer working for Takara Tomy relating to the series:

Additionally, in an interview with Figure King, Masahiko Yamazaki makes a comment that:

“It might be possible to release the products canceled by Hasbro to the Japanese market.” 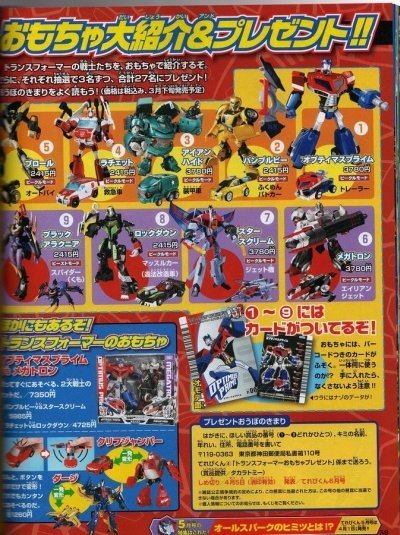 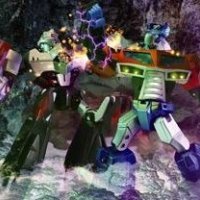 Takara Tomy has updated their webpage for the their version of Transformers Animated. The new information includes the respective toy pages with gimmicks as well as character biographies (All of which happen to be in Japanese).

They have opened a section for the toys, which covers the first eleven releases in the Japanese line – Optimus Prime, Bumblebee, Prowl, Ironhide (Bulkhead), Ratchet, Cliffjumper, Megatron, Starscream, Blackarachnia, Lockdown and Dirge.

They have also opened a section covering the cartoon characters, although presently only pages for the five Autobots are available. The five Autobot’s pages include full tech specs, which were absent from their US releases. 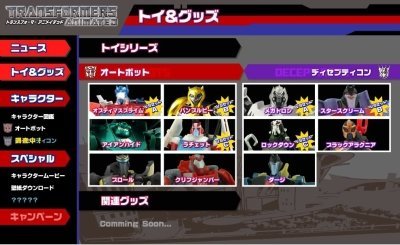 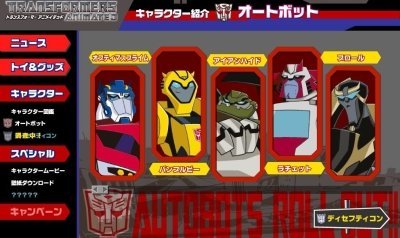 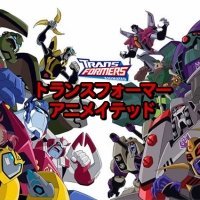 Some interesting news has surfaced for the Japanese dub of Transformers Animated, courtesy of Livejournal user toriaki. First of all, we have news on the Japanese dub’s theme song, which will be sung by the one and only JAM Project! JAM Project is made up of several well-known vocalists including Masaaki Endoh and Hironobu Kageyama, the latter of whom has previously provided the opening, ending and insert songs to Japanese Transformers series The Headmasters and Beast Wars Metals.

On the side of voice actors, toriaki’s post also confirms who will be voicing Optimus Prime, Bumblebee, Sari and Megatron in the Japanese dub of Transformers Animated. Optimus Prime will be voiced by Hiroki Takahashi, whose previous Transformers voice credits include Hellscream and Mantis in Beast Wars Second, plus Gildo and Build Hurricane in Car Robots (Japanese Robots in Disguise).

Mr Takahashi is also known for providing the Japanese voice of Street Fighter’s Ryu in Street Fighter IV and Tatsunako VS Capcom. Bumblebee meanwhile will be voiced by Daisuke Kishio, who previously voiced Kicker in Transformers Super Link (Japanese Transformers Energon), while Sari will be voiced by Satomi Akesaka. Saving the best for last, we have the legendary Norio Wakamoto playing Megatron.

Mr Wakamoto has previously provided the voice of Flame Convoy in Transformers Galaxy Force (Japanese Transformers Cybertron) and is recognizable as the voice of anime villains everywhere. His most notable credits include Cell in the Japanese dub of Dragonball Z, and providing the Japanese voice of Vega (M Bison) in many of Capcom’s Street Fighter titles.

Also mentioned in the livejournal posting is that the DVD / Blu Ray of Transformers Animated will be released in Japan starting in Fall 2010. 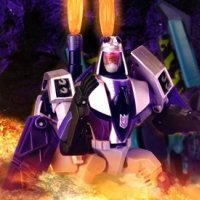 DragonX76 of Tformers has released a set of scoop on Transformers news coming out of Japan. Takara Tomy have updated their official site with profiles and many profiles and new images of the Transformers Animated Japan action figure series.