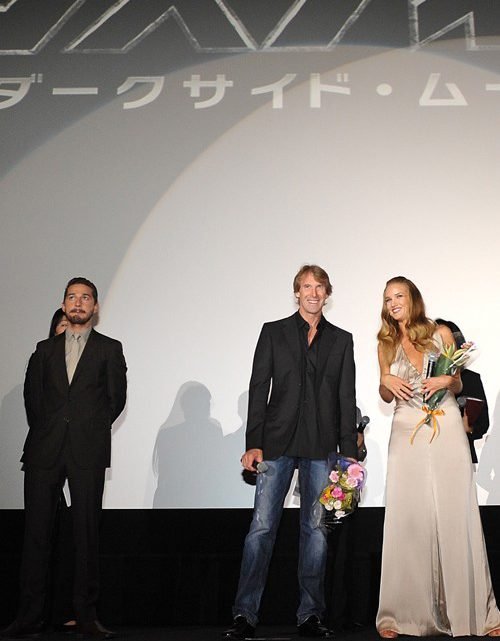 Jetting off from Shanghai, Michael Bay’s entourage arrived at Osaka, Japan for the Transformers Dark of The Moon premiere on Saturday 16th. Shia LaBeouf and Rosie Huntington Whiteley were side-by-side as they walks the red carpet at Osaka Station City Cinema in Osaka, Japan.

The 24-year-old British model and actress, along with co-star Shia LaBeouf and director Michael Bay, greeted fans who’ll get to see the action flick when it opens July 29 in Japan. The trio were there for the press conference and stage greeting/premiere.

Earlier in the day, Rosie stepped out in a Marios Schwab dress for a press conference at the St. Regis Hotel.

The Osaka press duties come as Shia and Rosie’s movie continues to pile up the cash – with the film having raked in another $6.8 million on Friday.

Pacing towards another $21 million in earnings this weekend, the latest box office earnings push the action film’s grand total up to a whopping $303 million!

Rosie, Shia, and Michael were also in Shanghai, China, to promote the latest Transformers flick, which already has grossed more than $700 million!

Check out the pictures of Shia LaBeouf, Rosie Huntington-Whiteley and Michael Bay at the Transformers Dark of the Moon stage greeting at Osaka Station City Cinema.