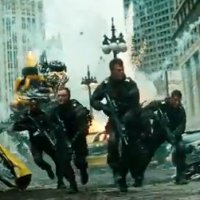 Transformers 3 Dark Of The Moon – Official Clip 6: Cover Up

This is the sixth official clip with close up of Laserbeak diving close to the limo with Bumblebee having a pep-talk with Sam. From the title of this clip, we could suggest that the Autobots learn of a Cybertronian spacecraft hidden on the Moon.

With only a handful of officials in the government and military realize that the 1969 moon mission was the result of an event that threatened profound repercussions for the entire human race.