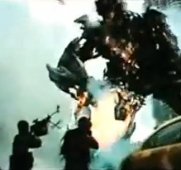 Just less than 48 hours after the latest exclusive clip – “Biggest Adventures”, a new Transformers Dark of The Moon TV spot was released in the US. The TV spot was aired during the MTV Movie Awards (hence the spot name) and NBA Finals.

Do check it out thought the quality of the upload is crappy. We will replace with a better one when the HD version is out later. Though you can see a lot of ‘recycled’ scenes but there is quite a number of new scenes. At the moment, do check it out!