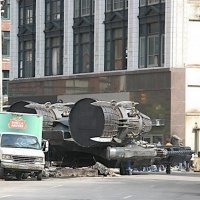 Filming of the third “Transformers” movie installment takes place in Central Florida this week. Film producers are staying quiet on the specifics, but a source tells WESH 2 News that some of the filming will take place inside the Orbiter Processing Facility at the Kennedy Space Center on Saturday.

The source said the film crew has asked that stainless steel flex hoses be made available and that one of the film’s stars will be landing on the shuttle runway in a private jet. Chopper 2 flew over an area near Orlando International Airport on Thursday where filming was said to be taking place.

The film has already shot in Chicago, Milwaukee and Detroit. The film is also expected to shoot in Washington D.C. According to director Michael Bay’s website, filming will also take place in Texas, Africa, Moscow and China.

Actors like Shia LeBeouf and Josh Duhamel will reprise their roles in the movie. Megan Fox, who is not in the film, is being replaced by Victoria’s Secret model Rosie Huntington-Whiteley.