ROTF Breaks Out The Big Guns

The United States military has declared war on giant, shape-shifting alien robots. Amid blinding platinum dunes baking in the 105-degree sun, scores of elite servicemen and women cluster in and around real tanks, rocket launchers and personnel carriers as they unleash a machine-gun barrage at an invisible (and entirely fictional) enemy: Transformers.

These troops, many of them recently returned from the actual life-and-death realities of Iraq and Afghanistan, aren’t professional actors. But for the moment, they are the stars and this is the climactic battle of next summer’s sequel Transformers: Revenge of the Fallen.

“I’m convinced. If we were to actually fight Transformers, this is how we would do it,” jokes Lt. Col. Francisco “Paco” Hamm, the Air Force liaison to the film, who oversees the use of the branch’s humans and hardware.

The U.S. Department of Defense gave its official stamp of approval to the Michael Bay-directed film, not only allowing production amid the pristine dunes of the Army’s New Mexico missile range, but also letting filmmakers follow jets and fighter planes through the sky from nearby Holloman Air Force Base. More scenes were shot on the Navy’s aircraft carrier USS John C. Stennis, and Marines fill the ranks of the strike team battling the invading Transformers.

The DOD has long seen benefit in joining forces with Hollywood, though its participation depends on script approval. The Pentagon demands some measure of realism — at least in how the military behaves, despite the giant robots. And it expects the films it partners on to shed a generally positive light on the service. Movies such as Top Gun, regarded as a major boost for recruitment in its day, and the recent Robert Downey Jr. blockbuster Iron Man received military cooperation. Films that are darker or more critical, such as A Few Good Men, are on their own.

One reason the military cooperates with filmmakers is to provide a boost to the rank-and-file, Hamm says. “The morale level goes through the roof. There’s nothing like an airman taking his family out to Transformers and watching the kids see something their father or mother does on the big screen.”

What makes the sequel to 2007’s Transformers different from other Defense Department movie partnerships is scale.

The film’s Army liaison, Lt. Col. Gregory Bishop, notes: “As far as I know, this is the biggest joint military operation movie ever made, in terms of Army, Air Force, Navy and Marines. I can’t think of one that’s bigger.”

Among the equipment the movie is using in this desert sequence alone: two A-10 Thunderbolt II “Warthog” tank-killing jets; six F-16 Fighting Falcons; 10 armored Humvees; the Army’s Golden Knights parachute team; two Abrams tanks; two Bradley tanks; two missile-launcher vehicles; two armored personnel carriers; and a quarter-mile of the missile testing range, cleared of unexploded ordnance and built into an Egyptian town and temple. (Signs warn not to cross a perimeter just over the gypsum dunes, because live bombs could be hidden in the sand.) 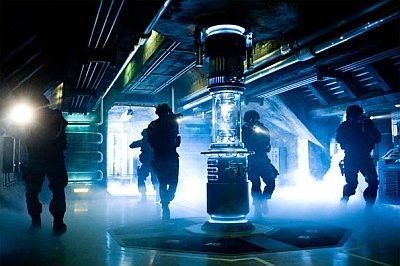 Among the most important military assets, however, are the off-duty enlisted men and women paid to be extras or play bit parts, Hamm says. “They are absolutely loving it. It’s a great opportunity for them. Not only do they get to be in the movie, but they get to showcase what they can do. When Michael Bay’s directing them, they know all the basics of their weapons and what they’re actually supposed to do, so it’s easier for filmmakers to direct the scene because they’re real soldiers and airmen.”

So many people are firing so many guns that civilian crew workers go through between shots, gathering up buckets full of empty brass shell casings. Having so many scattered around clutters later shots, and the workers say they can trade them in as scrap and get enough money for a few cases of beer.

There’s a standard rivalry between the Air Force and Army, but it’s even more intense in this part of New Mexico, with the Army’s White Sands Base and the Air Force’s Holloman so close to each other. The military extras split into camps favoring the two main military characters: Josh Duhamel’s Army Ranger Capt. Lennox and Tyrese Gibson’s Air Force Master Sgt. Epps.

Gibson taunts Duhamel that he’s the one with the promotion this time, from tech sergeant in the original. “They moved me up in rank,” he says. “I felt like in the first film we were following him and chasing him around. Now, I break down all the coordinates and let them know where to drop bombs and bring the rain.” 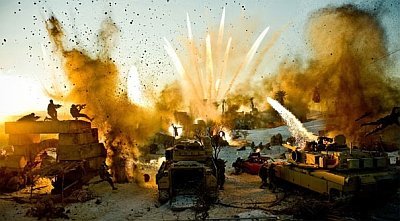 Duhamel says the leader they’re all following, military and actors alike, is Bay, who is known for such large-scale blow-’em-up popcorn movies as Armageddon and Pearl Harbor, both films that also had large military elements.

“He’s like a big kid who loves to do stuff like this,” Duhamel says, gesturing with his arms to indicate a massive explosion. ‘The run of things’ on base

The final battle the military is helping Bay create is supposed to be an enormous firefight in Egypt, but much of it is being shot in the White Sands dunes in a town built over the roughly quarter-mile cleared span. There are rundown, mud-brick homes and shops, and along the edge of the town, a giant temple with smokestack-sized columns — all of it built so it could be blown up.

After completing work in New Mexico, the cast and crew moved to Giza for scenes at the actual pyramids, getting first-time access to the 5,000-year-old site from the Egyptian government. “It plays a big plot point,” Bay says, noting that they were allowed to shoot on the pyramids — not just around them.

No foreign government would allow a U.S. military force like the one Bay assembled to march in, guns blazing, fighter jets swooping overhead, which is why so much of the climactic sequence had to be done in the USA, preferably on military property.

“They let us do the run of things,” Bay says. “We have so many military assets because this is a great middle ground between a bunch of bases. Plus, this is a missile range — we can just fire into the set. It’s a great place.”

The Army allowed the M1 tanks to fire dummy rounds, which count as training for the tank operators, into the set. Bay, though, was angling for live ones. The studio has to reimburse the U.S. Treasury for live munitions and other requests for troops or equipment that unit commanders don’t consider to be valid battle simulation or part of military training, Bishop says.

Jets are the hardest thing for moviemakers to procure, and producers have to negotiate with multiple layers of Air Force brass to allow planes on training missions to do flyovers during filming — often as Hollywood-rigged strafing fire is set off below.

During this shoot, an F-22 Raptor roars by like a mechanical arrowhead, blasting the earth with the banshee scream of its engines. It circles the set dozens of times before heading off to complete its scheduled training.

In the movie, the F-22 will become the machine-shape of the Decepticon Starscream. “Well, you know,” Hamm says, “somebody’s got to play the bad guy!”

As evening draws near, the sun sets off its own pyrotechnic show above the distant mountains, and Bay is setting up his final shot of the day: a massive battle sequence involving all the military vehicles and dozens of troops.

The only problem: Everybody wants to get in the shot, so rooftops are jammed with soldiers. “Too many lookeeloos!” Bay bellows through his bullhorn.

Bishop looks up at one house with about 20 soldiers on top, clutching their machine guns, and says, “You’d be a real hi
gh-value target. You know what that means? It means I could kill a lot of you with just one shot, one grenade. Spread out!”

He tells some to move to a less conspicuous place. They’re the unlucky ones; they won’t easily spot themselves on-screen when the movie comes out.

“Plausibility!” Bishop bellows. “It has to be realistic!”

Army Sgt. Matt Hibbert, holding a prop sniper rifle, calls down: “But sir, this is Hollywood! I’m shooting at invisible aliens and firing a gun that never runs out of ammo!”

Bishop bursts out laughing and lets him stay.