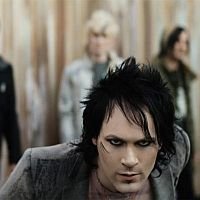 Metropolis/Level 7 recording artist Julien-K has been very busy since the release of their long-awaited debut album “Death to Analog” earlier this spring.

Aside from playing a round of dates in the Southwest and West Coast, the band has been hard at work, composing the score to the highly-anticipated video game for ActiVision’s The Transformers: Revenge of the Fallen, based on the upcoming live-action feature film from DreamWorks Pictures and Paramount Pictures, opening nationwide on June 24, 2009.

In addition, the band is gearing up for a national tour as direct support for Combichrist on the second leg of Demons on Tour.

Set for release concurrently with the movie’s premiere on June 24th, the game’s music includes over 70% of all new music by Julien-K, unreleased and composed specifically for the game itself. The game lets players take on the role of their favorite AUTOBOTS® or DECEPTICONS®, picking from the largest, most diverse range of playable Transformers – each with their own distinct abilities and weaponry.

The Transformers: Revenge of the Fallen video game is currently in development by Luxoflux for the nearly all videogame platforms, including Xbox 360®, PLAYSTATION®3 and WiiTM and is rated “T” (Teen – Mild Language, Violence).

Julien-K will be embarking on a naional trek supporting Combichrist, kicking off on June 12th at New Orleans’ The Hangar and circling the States. Julien-K has toured significantly in the last two years and created quite a thunderous stir on tours with Evanescence, Mindless Self Indulgence, as well as a mainstage slot on Projekt Revolution alongside Linkin Park, My Chemical Romance, Placebo, Taking Back Sunday and HIM.

Their show a few weeks ago at Los Angeles’ Roxy was a packed affair, of which Mishmash Magazine lauded, “Twenty minutes into their set, if you hadn’t been converted by the energy of the songs that came before, then you surely would have been seduced by the slow, methodical love-making vibe…”

Julien-K’s Death to Analog was released on March 10th and Revolver opined, “Imagine Depeche Mode’s Dave Gahan with attitude instead of angst, and you’ll have a sense of just how cool Ryan Shuck sounds.” It was executive produced by Chester Bennington (Linkin Park) and mixed by Tim Palmer (The Cure, HIM, U2).