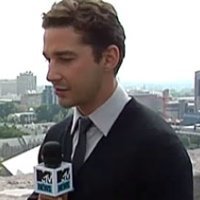 “Strange” is how Megan Fox describes the way she’ll probably be feeling when she hunkers down into her seat to take in Shia LaBeouf and “Transformers 3” next summer. The 24-year-old actress was ousted from the production in a stunning turn of events in May, only to be replaced by Victoria’s Secret model Rosie Huntington-Whiteley.

And while Fox told MTV News that she “might be a little jealous when I see somebody kissing my Shia,” LaBeouf acknowledged that there are both upsides and downsides to smooching with another actress while alien robots battle around them.

“I think there’s positives and negatives to her not being [in the movie],” said LaBeouf, who was at the Toronto Film Festival to promote “Wall Street 2.” “It’s awesome that we get the discovery again. I think when everybody’s vetted and everybody’s been through these wars, then that discovery of the first film is nonexistent. It’s kind of beautiful in that we get a new set of eyes, a fresh set of eyes for the audience to vibe with. So you get the discovery again, which is something that wouldn’t happen if Megan came back.”

Yet he still counts Fox as a good friend, and praised her turns in the first two “Transformers” flicks. As for Huntington-Whiteley, who will make her acting debut in the new film, LaBeouf said she’s “doing great,” though there’s little he could do to prepare her for the experience of working with famously fiery director Michael Bay.