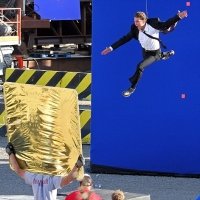 Shia Bruised & Battered For The Moon 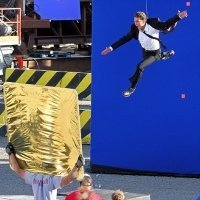 In the first two Transformers films, Shia LaBeouf’s character Sam Witwicky has battled the deadliest of robots and nearly died on several occasions. And it seems the third installment of the film franchise will live up to its predecessors, as LaBeouf showed as he filmed intricate aerial scenes on the set of the movie in Los Angeles yesterday.

The 24-year-old actor was strapped securely into a harness before being hoisted into the air to shoot the scenes in front of a huge blue screen. LaBeouf was also seen shooting scenes alongside co-star Patrick Dempsey.

The actor, of Grey’s Anatomy fame, spoke recently about his delight to be cast in the movie, and certainly appeared to be enjoying himself on set.

He said: ‘In Transformers 3 my character is a race-car driver, which is perfect. It’s cool to have all those toys in the movie.’

There have been few details revealed about the storyline of the upcoming film, director Michael Bay has said that this is likely to be the last movie in the franchise. He said: ‘As a trilogy, it really ends. It could be rebooted again, but I think it has a really killer ending.

‘The movie is more of a mystery. It ties in what we know as history growing up as kids with what really happened.’

Talking about Malkovich’s role in the film, producer Lorenzo Di Bonaventura said: ‘Malkovich is going to have a lot of interaction with Shia in that movie.

Malkovich added: ‘I’d seen the first Transformers, which I liked and thought it was fun, and then Lorenzo and producer Mark Vahradian approached me about it. I like working with them very much.’ Since it started filming, Transformers 3 has caused controversy through the replacement of former lead role Megan Fox as well as a series of injuries which have occurred on set. However, fans are still desperate to catch a glimpse of the new movie, and seen keen to see how British model Rosie Huntington-Whiteley will adapt to playing Fox’s role.