Michael Bay, you sir are a liar! And that’s part of the reason we love you. That and your ability to blow shit up in impossible locations around the world and capture it on the screen like a ADD chimpanzees with a 35mm camera.

Okay, we’re over it. After the jump, you will see a new featurette that aired on MTV on Saturday  and introduces us to the world of Transformers 2.

Roberto Orci has revealed the identity of a character that will show up in Transformers Revenge of The Fallen in his own Q&A thread over at tfw2005.com.

On the other hand, more revelations came to light. Thanks to Arlin over at the The-Arker who’s posted some of our first looks at the Transformers Revenge of the Fallen Leader class Megatron. Yeah yeah, Michael Bay said something… who cares really as long as we get those Giant F*cking Robots on the screen.

The new images show the Decepticon Leader in the box with shots of the front and the back. We get to see his bio and well, the cat’s out of the bag Mr Bay.

Just like we thought, dumping Megs at the end of the 2007 was just a rouse. He’s back and now thanks to the bio summary we’ve got the details on how:

Rebuilt with parts cannibalized from other Decepticons, Megatron Rises once again to lead his army. Though the Allspark destroyed him once, he can now feel its power coursing through his circuitry. It calls him to seize his rightful place as ruler over the puny planet on which he was imprisoned and destroyed, and from which he will launch his conquest of the Universe. 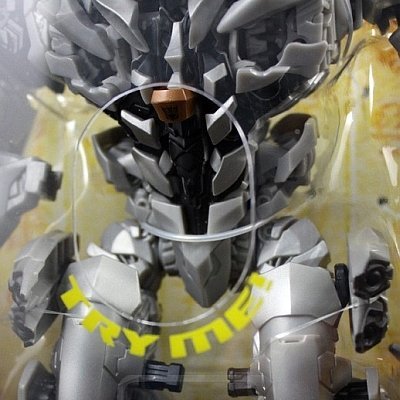 Optimus Prime is all that stands between him and victory, and the Autobots Leader has done a poor job of hiding himself. At long last, Megatron knows exactly where his enemy is and he has power enough to destroy him. 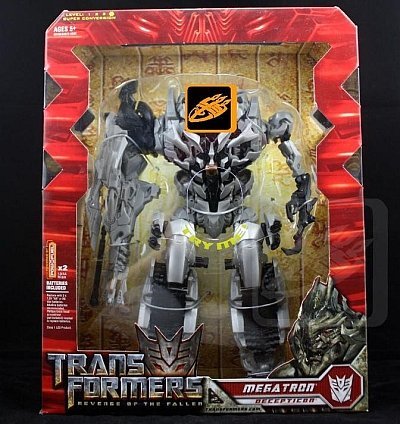 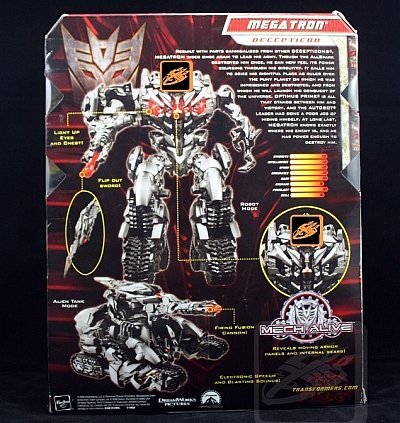 Hmmmm, sound familiar? Is that exactly what happened in Transformers Animated or what? I told you guys on the forums this was going to happen.

The speculation of Megatron to be seen in “Transformers: Revenge of the Fallen” has made its rounds since CHUD reported that “Megatron could be brought back by the Autobots, who need him to conquer the new menace.” However, in Empire’s new 2009 preview issue, director Michael Bay was quoted denying the rumor, saying “He’s not in this movie. That’s not misinformation. The tank design you may have seen is just Hasbro coming up with a new toy.”