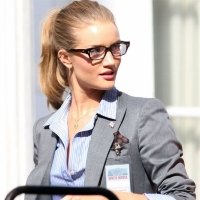 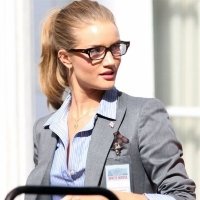 When Rosie Huntington-Whiteley replaced fan favorite Megan Fox in the upcoming summer sequel Transformers: Dark of the Moon, the young actress stayed fairly quiet in the press. Today, she has come forward with her first interview since filming. And she revealed some new details about her role the upcoming blockbuster.

Though pressed, Rosie Huntington-Whiteley could offer very little on her character’s background.

“She’s English and is working for the British embassy… I can’t tell you more! That’s all I can say for now!””

Rosie Huntington-Whiteley then went onto talk about the casting process on the movie.

“I went to the casting unaware they were looking for a new female lead. We were told it was for a ‘nemesis’ role and I left thinking I was awful. The next day I was offered the lead! I met with Shia LaBeouf that evening and within three weeks I was on set shooting my first scenes…

In other Transformers: Dark of the Moon news, Optimus Prime himself visited the American International Toy Fair in New York and received a $115 parking ticket.

The screen-used tractor-trailer version of Optimus Prime was parked on 41st Street near 8th Avenue in front of Times Square after being dropped off on a flatbed in two pieces from Los Angeles. New York City drivers had a hard time making it around the 9 ft vehicle, which was charged with blocking traffic.

Apparently, the truck is only drivable on a movie set, and not street legal. Although Hasbro, who had the truck and trailer shipped in for the Toy Fair, had all of the appropriate street permits, Optimus Prime still received a ticket. There is no word if Hasbro will pay the ticket at this time.

Tyrese: DOTM The Biggest & The Best