It appears that the legendary Mike Patton (Faith No More, Mr. Bungle) has been cast to voice Decepticon Constructicon Mixmaster, reports MovieWeb.com.

Rumors regarding Patton’s involvement in the highly anticipated summer sequel Transformers: Revenge of the Fallen were confirmed today by a “close” friend of the singer (who may or may not live in Philadelphia).

Patton will lend his unique vocal talents to Mixmaster, one of the seven Decepticons that form to create Devastator. He is a concrete mixing truck that serves as the left leg of this gigantically awesome robot.

Patton is said to have landed the gig after producers heard his voice work on the video game The Darkness. This is a big year for the prolific singer, as his score for Crank: High Voltage will be released this coming Tuesday. And he is currently in the midst of embarking on a European reunion tour with his former band Faith No More.”

It was recently reported that Michael Bay would be pursuing Frank Welker, the voice behind legendary Transformers characters Megatron, Soundwave, Frenzy, Ravage, Ratbat, Mirage and Trailbreaker,

He also inherited the role of Galvatron from Leonard Nimoy. His other recognizable voice work includes Goro of Mortal Kombat and Nibbler of Futurama. 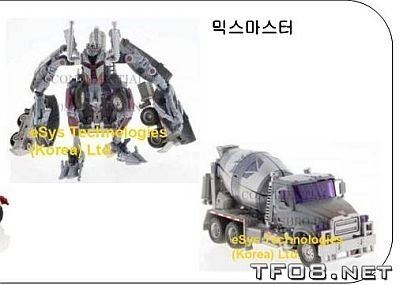