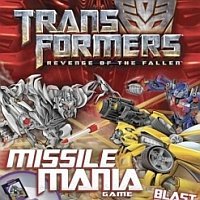 Many have called me a Michael Bay apologist. I enjoyed Transformers and am very much looking forward to Transformers: Revenge of the Fallen.

I understand that Bay wants fans to enjoy the movie without knowing too many spoilers, but where do you draw the line? I don’t understand why Michael Bay feels the need to go around and try to pass off blatantly false misinformation to try to trick fans. Bay told Empire Magazine earlier this month that Megatron is “not in this movie. That’s not misinformation.”

Strangely enough, the character who is supossedly not in the film, has begun to show up on the packaging of new Transformers: Revenge of the Fallen products. For example, in the cover art for the Missile Mania game or side of the new Bumblebee toy packaging.

The packaging even includes possible information about Megatron’s return:

“The moment his sensor net registered Megatron going offline, Starscream knew that battle was over and the Allspark lost. He converted to vehicle mode and boosted for outer space, hoping to buy enough time to rally the Decepticon survivors.

Returning from Cybertron bearing the marks won during his reign over the Decepticon army, he is cocused on conquest. With a new army behind him, he has the strength to pursue his own goals, and perhaps, when the time is right, bring Megatron back.”

Michael Bay should tell the company that designs the packaging for all the Transformers sequel toys that Megatron isn’t in the new movie, or else they might have to recall all these misprinted boxes. Wow, and to think that they spent a lot of extra time redesigning a character who clearly doesn’t even appear on screen in the sequel. What a waste of money… </sarcasm>

And before anyone blasts me for posting “Spoilers”, let me remind you that Megatron is all over the f’n packaging of all the toys. If it’s a spoiler, than they’re doing a very bad job at keeping it concealed.