If the analogy is convoluted, then stick with the layman's terms: big movies put out by Fox, Pixar, and other companies generally put out hastily thrown together video games that all run and look the same except for the different faces it puts on them.

For example, take Kung Fu Panda.  Cute movie, you gotta love that Jack Black, but the game wasn't anything special, homologous.  And it seems that I can't turn around three times in any given gaming store or section in America and not see those stupid movie games about the four zoo animals that broke loose from New York.  That movie was terrible and game played like so many before it, such as Shrek.  Blargh.

So, with the franchise monkeys just flinging crap-sicles out of their tall corporate cages, with what enthusiasm should we approach the new Transformers video game title?

The details on this—I'm sure—highly anticipated release are somewhat cryptic and hard to come by.  The game hasn't been set with an official release date yet, but we can assume that it will come out with its movie counterpart, which is set to be released June 26th.  We can easily expect that the game will be readily available sometime close to before or immediately afterward.

The title is to be a third-person action game that launches you headfirst into a digital world where "every second and every choice makes the difference between mankind's salvation and annihilation."  Sounds super epic.

"The game lets gamers step into the shoes of the Autobots or Decepticons, select any available mission and pick from the largest, most diverse range of playable Transformers – each with their own distinct abilities and weaponry," says the publisher.

Also, unlike it's wimpy predecessor, this game boasts that the player will have full capability of going online and playing against other players in an aggressive online battle-mode. 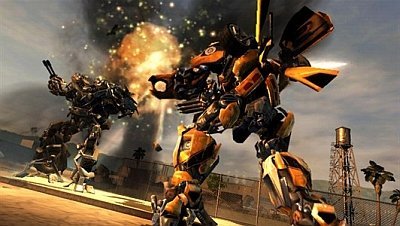 As for gaming consoles and the selectivity: Luxoflux has been charged with the task of creating the game for Xbox 360 and PS3.  Beenox studios is behind production for the PC version of the game.  The Wii and Playstation 2 production has been upheaved by a company by the name of Chrome Studios.  And for the Nintendo DS, production company, Vicarious Vision is working on the game.