As such, we're not expecting any major product reveals, but today we learned that GM will be introducing us to the new Bumblebee from the movie Transformers: Revenge of the Fallen.

He's the same Bumblebee from the first film, but the Camaro into which he transforms has been spiffed up for the sequel with a new front bumper, chin spoiler, hood scoop and different wheels. Whereas the first Bumblebee was based on the Camaro Concept, it appears that the new one is based on the actual production car.

Joining the orange Camaro in Chicago will be other characters from the film in their car forms. New additions to the sequel brandishing a GM badge include a 2010 Chevy Volt called Jolt, a Chevy Spark called Skids and a Trax concept called Mudflat (together known as the Twins), and a character called Sideswipe based on the still-yet-to-be-revealed Corvette Centennial Concept.

GM didn't specify in its press release (included after the jump) which characters are accompanying Bumblebee to Chicago, but the venue at McCormick Place is one of the largest exposition centers in the world, so the more Transformers the merrier. 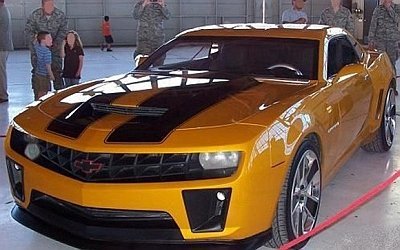 On Wednesday, February 11, 2009 Chevrolet and Paramount Pictures are proud to announce the return of BUMBLEBEE ™ to the Chicago Auto Show, in anticipation of the upcoming movie, "Transformers: Revenge of the Fallen." BUMBLEBEE ™ , the heroic AUTOBOT ® based on the Chevrolet Camaro concept, will appear for the first time in public with other new Chevrolet "characters" from the film at a press conference scheduled to begin at 10:15 am CST in the Chevrolet exhibit at McCormick Place.