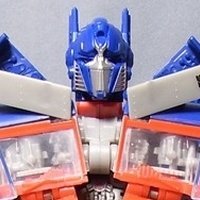 While fans is still loathing over the ‘disgusting’ look of DOTM voyager Optimus Prime that will end up as shelf-warmers, a gleam of hope suddenly emerged from FMH stating that there will indeed be a leader class Optimus Prime for DOTM after all.

Thanks to Takara, their intel hit us this time revealing that DA28 Leader Optimus Prime, with no pictures or further details have been released to our knowledge as a leader class Optimus Prime scheduled for DOTM.

The full product name is called DA28 DX Redecoration Optimus Prime Leader which was slated for release 1st Oct 2011. However, the listing specifies this figure is going to be a redeco of an existing one be it first movie or ROTF or HFTD, who knows?

The line has already been littered with a deluxe, voyager and ultimate class. Seems like this leader class is going to complete the class linage after all.

Keep your eyes peeled for 1st October guys, and lets see if this class redeem itself better compared to the voyager classes ones this time.

Nokia X7 Rolls Out in Hongkong