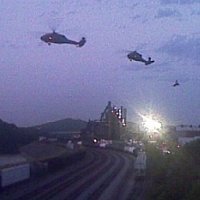 Explosions, blazing lights and even military helicopters will all be part of making a Hollywood movie about giant, shape-shifting robots — but, as the Bethlehem neighbors of the “Transformers 2” movie set will find out next week, it might not involve much sleep. The movie’s crew will be turning the former Bethlehem Steel site into a nighttime war zone from 4 p.m. Monday until 7 a.m. Tuesday, Mayor John Callahan said Wednesday.

The filming will continue the following two nights during the same hours. Notices were sent to neighbors and nearby business owners Tuesday warning them about the upcoming noise, glare and road closures that will come along with the filming of one of the movie’s opening scenes, which will feature the computer-generated robots alongside Steel’s instantly-recognizable blast furnaces.

“It is essentially going to be a simulated war,” Callahan said. “Overall, it’s a great thing for the city,” he said, citing the economic impact from the roughly 200 crew members staying in hotels and buying supplies. At the same time, city officials know the filming might be an inconvenience for anyone trying to sleep through director Michael Bay’s pyrotechnic displays. Callahan said officials want to make sure residents know what’s going on so they won’t call police with worries or complaints about the noise … The Bethlehem scene will be set in a fictional Chinese city. The movie’s crew has already recruited dozens of local residents of Asian descent to work as extras.

Members of the movie crew appeared to be building part of the set Wednesday at the western edge of the blast furnaces. Also on Wednesday, dozens of trucks carrying filming equipment rolled into a parking lot at the nearby Steel Ice Center. “It’s pretty thrilling that they’re going to be right here,” said Nancy Hudson of Bethlehem, the ice rink’s receptionist, adding that she and her family are “big fans of Optimus Prime” — the heroic Transformers leader who changes into a tractor-trailer.

“Right now, we’re all kind of looking out and wondering what’s going to happen –…and hoping that they have people watching their equipment,” Hudson said, alluding to the pricey lights and other filmmaking supplies. In fact, security is tight on the movie set, the Bethlehem Steel site and even the ice rink’s parking lot. When a Morning Call reporter checked out the parking lot Wednesday afternoon, a security guard with a badge featuring the “Transformers” logo politely asked him to move along …

Asked where other curious onlookers might get a glimpse of the action, Callahan declined to offer any suggestions. “We’re not necessarily encouraging people to come out,” he said, but he acknowledged that people are excited to see the filming and will probably find some good vantage points at a safe distance. “It’s like the fireworks,” Callahan said. “We don’t tell people where to go to watch the fireworks, but they seem to figure it out.”

Woot! This does sound exciting. You may recall that portions of the finale scene in last year’s Transformers movie were shot in downtown Detroit, MI so I totally understand how much fun this must be for the folks in Bethlehem, PA. If any of ya’ll manage to snap any cool pics, feel free to send them in for sharing on the blog. I can’t believe we’re already at the start of a new Transformers movie … it seems like just yesterday that we heard production began on the first movie.