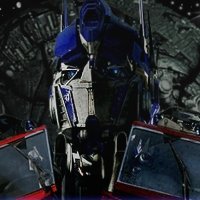 Everything in this article is a spoiler… but for only the first few minutes of Transformers 3. No major plot points are revealed.

No massive secrets are given away. What I am about to tell you is a cool thing that opens the film in a surprising way. If you already know you’re going to see Transformers 3, skip this article. Enjoy the surprise on the day of release.

If you’re on the fence or think you might skip Transformers 3, read on to see that perhaps there’s an interesting spark of an idea at the center of this movie. Will that spark mean Transformers 3 will be any good? I don’t know, but it’s certainly got a great start.

There’s a disturbance on the Moon. A robot shaped disturbance. Scientists on Earth see this and the information gets passed up the chain of command. In the White House men in black suits are breathlessly running through the halls, and they burst into the Oval Office. The president is behind the desk, back turned to the door, looking out the window. One of the men tells the president, ‘Sir, something’s happened on the Moon!’ The president turns around.

Yes, the opening scene of Transformers 3 takes place in 1961 or 1962. The gist of the story has to do with the Transformers’ involvement in the space race, and this is the reason why JFK was so hot to make sure America was first to the Moon. It sounds like a fun direction; there are a lot of stupid conspiracy theories about Neil Armstrong et al meeting ETs on the Moon, and this is a fun way to play with them.

I hear this was Spielberg’s idea, and it really does sound like something he’d come up with. If you’re like me and you like the Spielberg-influenced Transformers but hate the mostly Spielberg-free Transformers 2, this is all good news.