AICN was sent a photo from the Chicago set of the third “Transformers” movie, showing a shot of a strange new robot being brought in by truck. Check it out below. How this robot will be used is unknown. It could just be a stand-in for another character that will eventually be brought to life using CGI.

Another guess is that maybe humans built their own robots to battle against Decepticons, or this is somehow related to the US/Russian space race. To me, the robots looks more like it is from a “Judge Dredd” movie or from Hugh Jackman’s “Real Steel,” which has robots boxing against each other.

Ok, well, while we’re throwing out wild theories: maybe the Beast Wars Transformers are featured in the third film, or maybe Sam Witwicky (Shia LaBeouf) is injured and has to have his brain implanted in a robot body! Who knows what crazy things can happen in a Michael Bay flick!

Sarcasm aside, as long as there are no dangling robot private parts, ebonics-speaking bufoons, leg-humping midget bots or hot chick robots with tentacles potruding from awkward regions of their bodies, I’ll take just about anything as an improvement over Transformers 2. Hell, at least I’ll be able to distinguish this guy in the photo from the other hordes of robot clones onscreen. 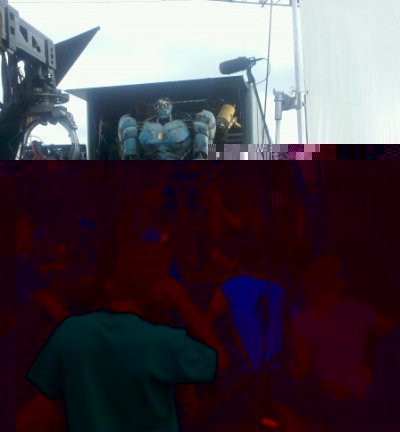 “Transformers 3” is once again directed by Michael May and stars Shia LaBeouf, Rosie Huntington-Whiteley, Josh Duhamel, Tyrese Gibson, Alan Tudyk and John Malkovich. It is scheduled to hit theaters on July 1st, 2011.

TF3 Vs Megan Fox, Who Is Losing Out?
0 0 votes
Article Rating
Subscribe
Login