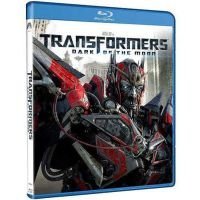 As we have heard before this, 30th September will be the date of the Transformers DVD Release day and it like we’ve seen and heard previously. While many might have imagined the cover of the DVD is going to be standard, retailers on the hand will be offering up their own editions to lure fans into their stores.

Wal-Mart has posted a pre-order page for the Transformers: Dark Of The Moon (Blu-ray) (Exclusive) (Widescreen) edition with a special cover showing the Autobot traitor Sentiel Prime. The DVD will be released on 9/30 with a retail price of $19.96 if ordered online. It is not clear if the in-store price will be $29.99 or not. Check out the cover and more details after the jump.

In this new movie, the Autobots and Decepticons become involved in a perilous space race between the U.S. and Russia, and once again human Sam Witwicky has to come to the aid of his robot friends.The Autobots will showcase Bumblebee, Ratchet, Ironhide and Sideswipe led by Optimus Prime, who is coming back in action, taking on the evil Decepticons, who are determined to avenge their defeat in 2009’s “Transformers: Revenge of the Fallen”.