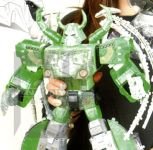 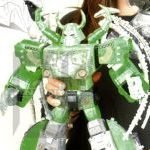 Special Shining Unicron was an exclusive alongside the Micron Legend 2003 Yearbook which was released by Jive, a distributor for Dreamwave’s comics in Japan.

This shining version is part of a special prize that will be given away as part of the release of the Micron Legend 2003 Yearbook.

Shining Unicron was supposed to be a representation of the Unicron clone that the Mini-Cons combined during the 50th Episode (Union) of the Armada series to stop the real Unicron from destroying Cybertron.

The competition only applies in Japan and to Japanese residents only. Link to the pics here.