Thanks to S250 who has posted an new image of the Leader class Optimus Prime toy for Transformers: Revenge Of The Fallen. The new image reveals there will be a new release of the action figure with a special gimmick that is being called “Mech Alive.”

It is likely a new name for the previously named “Automorph Technology” that was implemented in the 2007 line. From the picture, it says it “Reveals moving armor panels and internal gears.” Which sounds a lot like Automorph.

Word is, much like we’ve seen before, the Optimus Prime action figure will include double snap out energy swords, speech, light up eyes and chest, and engine revving sounds.

Following up from earlier news, the member “Anonymous” of the 4chan toy forums has posted the first full view of the Transformers: Revenge of the Fallen Optimus Prime Leader Class action figure.

You may recognize a couple of new things in the images of the robot. The action figure now has much more detailing than before. Also, there is confirmation that he’s got the additional snap out energy weapons, light up eyes and chest, and sounds features that were reported previously. 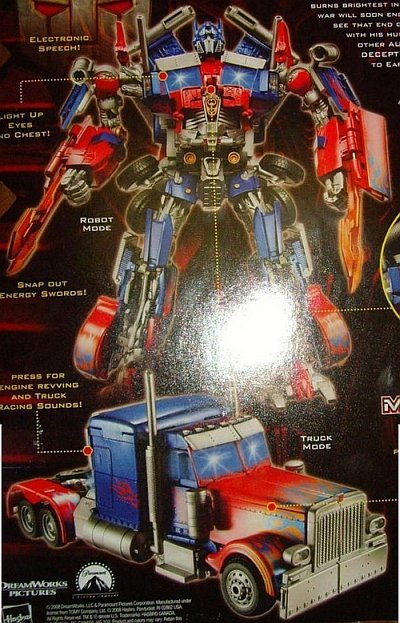 Altogether, it really looks like Hasbro is putting a lot more effort into making the new toys, this one at least, look a lot closer to what we see in the movies. If that matters? The real question is if these changes are representative of new things we will see in the movie.