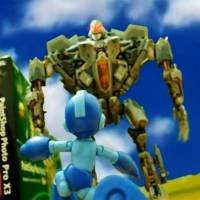 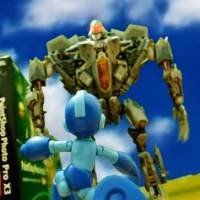 I’ve always been a fan of Capcom’s MegaMan video game series, to the point where back in first grade, I started hanging out with one of my classmates for the sole reason that I knew he owned MegaMan 2. I’m not proud of it, but c’mon: Who among us hasn’t based a friendship on less?


Back in my college days, I even bought a pricey action figure kit imported from Japan, only to find that it featured an Arm Cannon with a spring powerful enough to shoot the tiny metal BBs (three included!) across the room hard enough to chip paint on the wall. In other words, it was awesome, but since I didn’t want to put anyone’s eye out, I started to wonder just what to do with it.

Well, if you’re Taiwanese filmmaker Counter656, that’s an easy question to answer: You make a stop-motion animated short film where the Blue Bomber fights his way through Legos, mobile suits from various Gundam series and crushing walls to put his robot-destroying skills to the test against Starscream of the Decepticons. I mean, that’s just the next logical step. Check out the six minutes of robot-fightin’ action after the jump!

Counter656’s Mega Man and Proto Man toys aren’t quite the same as my old eye-gouger — they’re the newer Kotobukiya model kit figures and if nothing else, this video shows off how versatile the accessories and posability makes them — and I never had a desk that seemed to float in a cloudy void, either. Even so, this video sparked some fierce nostalgia in me, especially when I saw the tape holding the characters’ feet to the ground. I could never get those guys to stand up either.

Of course, there are a few things to note about this video, chief among them being that despite the fact that it’s named after Mega Man (or “Rockman” for the Capcom Japan purists out there), the real hero of this whole thing is Proto Man. Sure, Mega Man does the grunt work of dealing with laser Legos and crushing walls made from model kit boxes and copies of Paint Shop Pro, but if not for Proto, all of us here in the year 20XX would be speaking Decepticon. Think about that next time you’re choosing your character in MegaMan 10.

Also, despite the teaser at the end that one (or all) of these characters are going to be duking it out with Final Fantasy VII’s Sephiroth — the original King of Fan-Art — we don’t find out much about the aftermath of this fight. After all, if it follows the traditional rules of Mega Man games, then Our Robotic Hero should acquire one of Starscream’s abilities to use in his next fight. Now, in the video, we see him using a laser beam, a machine gun and the ability to turn into a jet. Those would all come in pretty handy, but I think there’s something even more valuable Mega Man could get from Starscream in this fight.