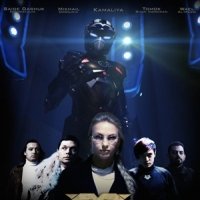 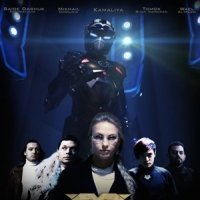 Malaysians, are you ready for a sudden flurry of movies revolving around heroes in robotic exoskeletons? Because given the massive worldwide success of the Iron Man films it’s absolutely inevitable that they’re going to come. And one of the first to arrive is Malaysia’s Mantera.

The first Malaysia Sci-Fi movie. About a boy, Azman who stumbled upon a nano-tech glove which can transform his motorbike into a body armor. The technology was created by a genius scientist at Western Tech. Corporation, Dr.Natasya Irina Pushkin.

However when she realize that her creation will be used by some man with power to destroy the world,she determined to sabotage it. In the meanwhile..

Sam Weston, the owner of Weston Technologies is furious over the security breach in his Research Lab. The prototype of his latest weapon system “Mantera” or MAN – Transformable Exo-Robotic Armour was sabotaged and destroyed.

Invaluable research data was stolen and deleted from the company’s mainframe. His main scientist who is leading the research team, Dr. Natasya was missing.

The buyer for the new technology is pressuring Sam to deliver the prototype or the deal is off. To make matter worse, the wreckage and debris from the destroyed “Mantera” was accidentally shipped to the other side of the world…. to a young man by the name of Azman, in Malaysia. Who is Azman, and what makes him the chosen one? Everything will be revealed in ‘MANTERA’.

A full trailer has just joined the previous teaser, showcasing much more of the suit in action. The CGI is certainly well below Hollywood standards but they’re aiming high, at least. It does look promising.