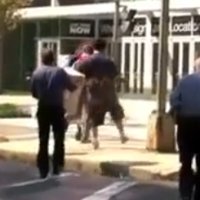 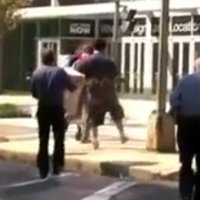 Today is the day that Shia LaBeouf finally revealed the sinister reaches of his influence. This morning, footage surfaced of LaBeouf enjoying a break from filming Transformers 3 in Washington D.C., taking in the autumn weather by reading a book outdoors.

Next to him, a cup of coffee. In front of him, a heavy-set paparazzo snapping pictures. Deciding he’s had enough (and perhaps not realizing a video camera was trained on him) he gets up, runs after the photographer, launches the coffee at his back, and goes on running as if a Decepticon were hot on his trail.

The whole thing is so absurd it almost looks like a viral Starbucks ad. Video of the incident quickly spread across the web until this afternoon, when something strange happened.

Suddenly, on sites all across the internet, the video disappeared. Websites like Perez Hilton and The Huffington Post were left with an embedded Youtube video that gets one of those “Video removed by user” notifications when you try and play it. Such denials are usually reserved for copyright infringements and the like, so we can’t really explain this one.

It’s no secret that LaBeouf has most of Hollywood in his back pocket, but Silicon Valley, too? That’s impressive. But the web is far to vast for LaBeouf and his cronies to fully censor, so guess what we found?