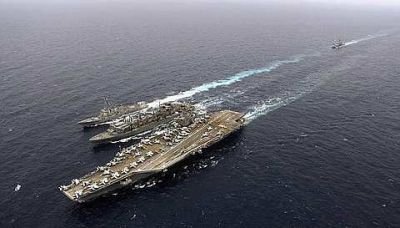 USS John C.Stennis, the American aircraft carrier that was seen in the movie Transformers: Revenge of the Fallen, is in town. The vessel made a scheduled port call yesterday, with 5,000 sailors and dozens of fighter jets on board.

Although the USS John C. Stennis, also called the CVN-74, had served in various operations in Afghanistan and other hotspots, and responded to disasters such as Hurricane Katrina and the tsunami in Indonesia, the ship is better known for its cameo appearance in several movies.

Rolling out: The USS John C. Stennis with 5,000 sailors and dozens of fighter jets on board in Port Klang yesterday.

Besides Transformers: Revenge of the Fallen, in which the carrier was seen in the film’s final battle in Egypt, the 15-year-old ship had also appeared in the movies Executive Decision and The Sum of All Fears, as well as in an episode of television series NCIS.

“It was in October 2008 when they filmed Transformers on board. (The director) Michael Bay, (actor) Shia Lebouef and everyone was here. 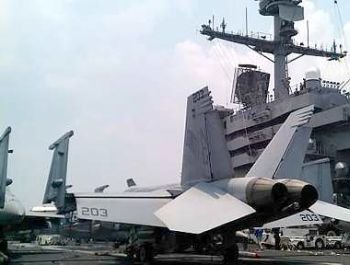 The fast combat support ship USNS Rainier (centre) offloading cargo onto the Nimitz-class carrier and the Arleigh Burke-class destroyer USS Dewey during a replenishment at sea.

“We were off the coast of San Diego, and they spent about a week filming,” said the ship’s public affairs officer Cindy Fields.

It was a hectic time, recalled Fields, as the sailors and air wing personnel were preparing for deployment.

“So we had them filming on one end, while tankers were taking off to refuel our jets which were in mid-air,” she said.

Lt Jesus Uranga, who was not around during the filming, said one of the crewmen even boasted that he was Optimus Prime. 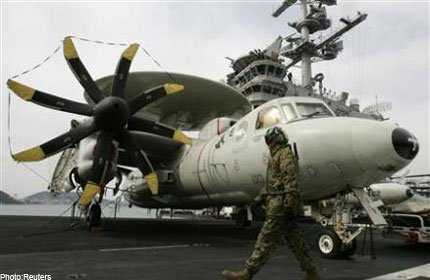 “He told me he was holding on to a high pole on the flight deck. The movie producers later superimposed Optimus Prime over the pole using CGI (computer generated imagery),” he said.

Rear Admiral Craig Faller, who is commander of Strike Group Three, which includes the USS John C. Stennis and a few destroyers, said he was very happy to visit Malaysia and would exchange views with his Malaysian counterparts.

He added that the average age of the crew was 26, with those on the flight deck averaging only 21 years of age.

Capt Ronald Reis, commanding officer of the USS John C. Stennis, said the United States would like to have regular visits to Malaysia.

Will it possible for any visit on board? Thanks

Hi,
we are just reporting the news…we are not in charge nor have any knowledge of admissions. sorry about that.

Will it possible for any visit on board? Thanks

Hi,
we are just reporting the news…we are not in charge nor have any knowledge of admissions. sorry about that.