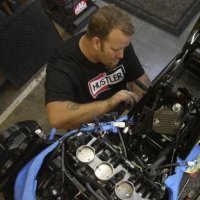 Will Kenefick’s superbikes have always had more than meets the eye. The performance motorcycles that grace magazine covers in gleaming paint and gears are customized to each buyer’sweight and riding style — and are as comfortable on a racing track as on a showroom floor.

It was one of those bikes from Kenefick’s RetroSBK in Camarillo that caught the eye of someone at DreamWorks. The next thing he knew, Kenefick was being asked to build six motorcycles for the “Transformers” movie sequel, due out in 2009. Once he established that he would be making three “hero” and three “stunt” bikes, the next order of business was to run out and buy the DVD of the first “Transformers” movie.

Although he was a “gearhead kid” with every Transformers toy he could get his hands on, the 37-year-old father of two hadn’t seen last summer’s blockbuster film.It’s now watched weekly at his house. RetroSBK, which Kenefick started in 2004, custom builds motorcycles that range from about $35,000 to more than $200,000, with the average bike coming in at about $70,000.

“Guys that have the money to buy those demand the best,” he said. Apparently, so do movie studios. “They’re pretty much built to the same level that we build all of our bikes,” he said. Creating the bikes was its own battle waged. Six bikes. Three weeks.

Kenefick said he has turned a bike around in as little as a week, but the standard time for a custom build is three to four months. That’s for one bike, not six. During the last week of work on the project, “I slept four hours between Monday morning and Friday at midnight,” he said.

It mostly fell on him and his one full-time employee. Kenefick did call on specialists for certain features, such as a lighting expert flown in from Phoenix. Kenefick estimates that he put in 1,273 hours on the bikes, while the painter racked up 1,036 hours. All told, cost of the bikes came to about $40,000 each — of which about $10,000 was in paint.

“I wish I could show you a picture of them,” he said. Of course, no one can see them yet. It’s not allowed. Still, that didn’t keep one magazine from sending a photographer to try to snag shots of the motorcycles while they were being built — “paparazzi-style,” Kenefick said.

That isn’t so far-fetched, since the biggest stars of the first movie were the machines. Kenefick said the bikes, because they’re portable, will be used for special premiere appearances. Kenefick’s job didn’t end with building the bikes. He spent the first week of June on site in Pennsylvania wrangling the motorcycles and making sure that they were being handled right and working properly. It made for some exciting 22-hour days.

Being on a movie set carries not only the excitement of watching the film process, but the anxiety of watching carefully babied machines pushed to their limits and, for some, eventually meeting their demise, perhaps in a fiery explosion. It is, after all, a Michael Bay film. “I invest a lot of myself into the bikes I do,” Kenefick said. “When I think of stunt guys falling down, that terrifies me.”

He said he knows going in that some bad things will happen to some of his motorcycles. “I won’t cry too much, but a tear will definitely be shed,” he said. An explosion of a different kind may find Kenefick’s business after the movie hits theaters. Already, Kenefick said his business has grown exponentially in the past couple of years.

He admits to being a bit worried about what all the publicity will do — although he’s also figuring out how best to get ready for it, including expanding his Camarillo shop. “I’m at that point where I’ve got to do something about it,” he said. It’s hard to bring people on, though, because “every bike I put out the door is my name, my reputation.”

Kenefick has been building bikes for more than 15 years. He attributes his love for his work to his father, Bill, who instilled a passion for drag racing and entrepreneurship in him. Kenefick’s work is akin to that of a sculptor, said David Morris, who wrote about Kenefick when one of his machines graced the cover of the exclusive Robb Report MotorCycling magazine. “That says a lot about his work, that we chose him,” Morris said.

Morris said Kenefick’s creative process is as much meditative as it is mechanical. “When he builds motorcycles, he tries to take a performance bike and tries to extract the maximum out of it,” Morris said. What results is a balance of power and a very distinctive aesthetic, he said. “One of the things that makes Will special is that he’s one of those rare people that you find who is not interested in becoming a celebrity builder,” Morris said. “He’s more satisfied in pursuing his art.”

Kenefick conceded that he isn’t a strong self-promoter. “I let the bikes kind of talk for me,” he said.