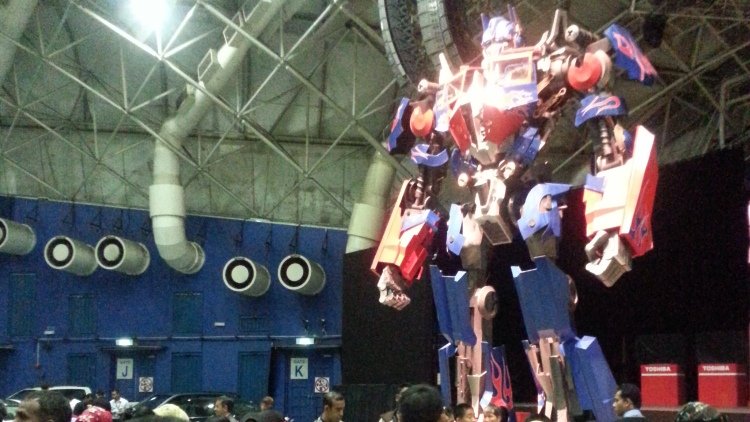 The Autobots and Decepticons have taken over the Arena of Stars in Genting Highlands.

GENERATION One, Robots in Disguise, Armada, Energon, Prime, Animated, Action Masters, Galaxy Force … name any character from any Transformers series, past or present, and chances are you’d be able to see its toy at the Transformers Expo Malaysia 2014 at the Arena of Stars, Genting Highlands.

“Wow, I used to have that Bumblebee!”; “I played with that Megatron when I was a kid!”; “Oh my god, the complete set of Dinobots!”…. These were some of the comments I overheard while lingering at the veritable treasure trove of nostalgia, toy technology, and childhood memories comprising more than 1,600 toys and figures from every single Transformers line ever released.

That impressive display of toys contributed by members of Transfans Malaysia (Transmy.com) is part of the largest showcase of Transformers ever held in Malaysia. Held in conjunction with Visit Malaysia Year 2014 and the Transformers 30th Celebration (yes, Optimus Prime and gang are 30 years old this year!), it runs until Feb 16.

Thirty years is a long time for a toy brand, and in these three decades, the Transformers have persevered through all sorts of media, from toys to TV shows, comics to their very own mega live-action film franchise (the fourth one, Transformers: Age Of Extinction, will be released later this year).

At the expo, you can immerse yourself in the history of this iconic toy line – there’s a 3D film detailing the brand’s history; augmented reality activities where you can dance or take pictures with cute Kreo versions of Optimus Prime and Bumblebee; a custom-painted Camaro Chevrolet (Bumblebee’s alternate mode in the live-action films) and even giant life-sized replicas of Optimus Prime and Bumblebee for you to take pictures with.

For the true Transformers fan, however, the main attraction would have to be that impressive display of toys at the very beginning of the expo. Later, as I lingered in the display hall, poring over every detail and reminiscing about all the cool Transformers toys I used to own, I marvelled at just how far the Autobots and Decepticons have come in these three decades.

Optimus Prime and his fellow Cybertronians are no longer just a bunch of toys for kids these days – they are an iconic part of pop culture history. And if the number of fans thronging the expo in Genting are any indication, the robots in disguise will definitely continue to be more than meets the eye for many more decades to come.