Revenge is Coming in TF HQ

I had a blast with Transformers last summer and am truly looking forward to seeing Shia LaBeouf and Megan Fox return. With that, the latest badass Transformers related news to pop up this week is an awesome display from Hasbro itself.

We all know that the official title is Transformers: Revenge of the Fallen, and that's why this is a perfect teaser for what's to come in 2009. You might not believe it, but this photo came from the My Little Pony Fair 2008 at Hasbro Headquarters.

I've got to say, this display looks so freakin' sweet. I might just have to drive up to Hasbro Headquarters in Rhode Island and steal this to put in my room to stare at all day long. The Decepticons will get their revenge in 2009 – bring it! Photo is courtesy of zum_zim2002 on Flickr. Badass? 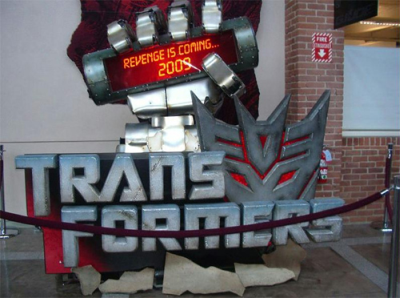 Transformers: Revenge of the Fallen is again directed by action film superstar Michael Bay of Bad Boys, Armageddon, The Island, and Transformers previously. The story for the sequel was written by Transformers writers Alex Kurtzman and Roberto Orci while the screenplay was written by Ehren Kruger (The Ring, The Brothers Grimm, Blood and Chocolate).

Paramount will be unleashing Transformers: Revenge of the Fallen in theaters on June 26th, 2009 next summer. We'll be there!