Every day, we here at Cinematical receive tons of Transformers nonsense — but instead of throwing it at you left and right, we figured why not collect it and dish it all at one time? Anyway,

Transformers Live has nabbed a photo of what appears to be Beetlejuice from The Howard Stern Show hanging in the background on set. No word if the little weird guy actually has a part in the film (or if Bay is keeping him around to torture for his own amusement), though I'm sure your anticipation meter just went up significantly.

In addition to the Beetlejuice news, two videos have also surfaced online. One shows them shooting a scene with Frenzy on top of a car, clawing at the front window, with Sam (LaBeouf) and friends inside. 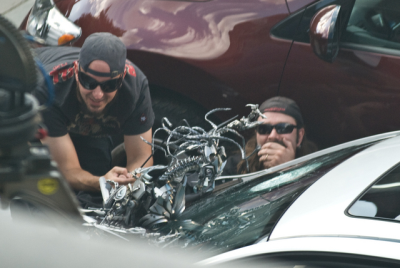 The other shows folks like LaBeouf and Megan Fox stretching from afar. Hot! And it comes with this ridiculous song about stretching. Even hotter! (Both videos included after the jump … but beware of total hotness!) Production on the sequel has officially moved to Princeton University, where Transformers Live also has photos and more videos of filming.

Nothing too life-altering, but if you're itching to see and learn more about the film, I guess that's the place to start. Finally, IESB tells us actress-comedian Kym Whitley has nabbed a small role in the film.