We decided to combine the two in an epic Babe-Off, pitting actresses from film and TV against the hottest models and music starlets. And all this objectifying of women is for a good cause – the appointment of a babe commander in chief – Baberaham Lincoln – the highest ranking official in all of Babedom.

Here's how it works: For four weeks, we will roll out 64 prime candidates, March Madness-style, and it's your job to declare us a winner. Vote as often and for as many girls as you like, and make sure to spread the word to friends, family, pets – everyone. The President of Babes is counting on you.

After delivering on Transformers' promise of more than meets the eye, Megan Fox, the actress and girlfriend of Terminator: The Sarah Connor Chronicles's Brian Austin Green, managed to become the world-accepted definition for all things "hot" and "where can I get some". 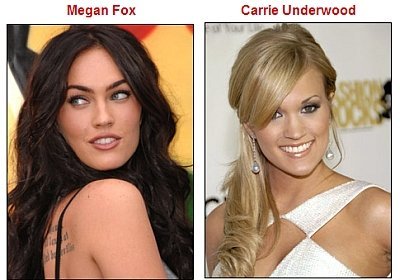 When she's not gracing the covers of every magazine on every shelf known to man, or shooting her roll opposite Optimus Prime in Transformers 2: Rise of the Fallen, she's a major player in our daily fantasy girlfriend league.

Fox has risen quickly to the top of Babedom's MVPs, becoming this generation's Jessica Alba. But come election time, when the votes are counted, this could be her greatest asset or her Achilles' Heel.

American Idol champion. Country music star. Babe pin-up. In a short amount of time, Carrie Underwood has done it all. She has also become one of the few attractive faces to come out of the country music scene, giving everyone pause to check out her, um, pipes. (Yeah, that's it.) Underwood's beauty and overall wow factor promises to be a potent combo in this year's Babe Election.