The image is of interest mostly because it gives us a hint at what the "Twins" characters, one who transforms into a green Chevrolet Beat and another who turns into a red Chevrolet Trax, may look like.

The design elements of the red "Tracks" M&M resemble the small piece of concept art that was leaked some time ago and the design of the green "Beat" character (rumoured to be named Skids, based on the vehicle's license plate seen in spy photos from filming) matches the Trax robot (perceptive fans may notice the buck-teeth)

The bag is labelled "collector's pack 7 of 7" – meaning other bags of M&Ms probably sport other M&M-style movie characters. 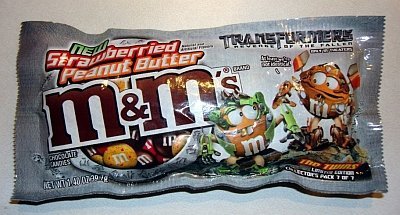