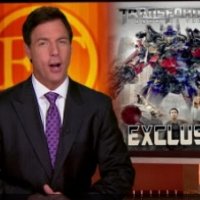 Just like previous years, ET was given an exclusive tour behind the scenes of the Transformers Dark of The Moon filming prior to the movie’s launch quickly approaching.

ET’s news anchor – Mark Steines and Samantha Harris were on the set reporting to provide an insight of Michael Bay’s filming crew’s activities and whereabouts in this action packed scene located at downtown Chicago.

There was a scene with stuntmen in high precision flyers doing skydives off the top of the Sears Tower in Chicago and flying through the city’s skyline down to street level while stars Josh Duhamel and Tyrese Gibson look on.

For more information about the interview and exclusive scenes, do check out the video to see more of ET’s exciting behind-the-scenes set visit.