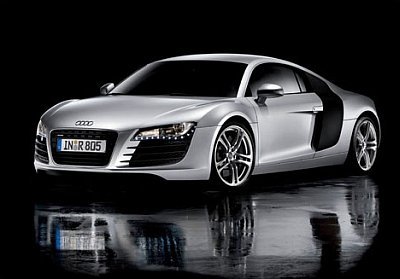 Buyers of the mid-engine Audi have picked up every model that will be made for months, which tells us what we already knew: the R8 is a legitimate smash hit. It's no surprise that the R8 is so successful on the sales floor, but the downside is that the vehicle's sustained popularity is keeping higher performance editions off the market. If a 420-hp 4.2L powerplant can take you to 60 mph in 4.4 seconds, just imagine what a 580-hp twin-turbo V10 will do on dry pavement.

The Ausi R8 will be featured as a transformer in "Transformers: Revenge of the Fallen". The Audi R8 is essentially a two seater and is available in India for Rs. 1.17 crore. How about a test drive eh?