The image features a better look at the combined mode for figures from the previously release photos, showing that Safeguard does indeed have molded fists.It is currently not clear how accurate the transformation shown in the image is to the official mode.

Jetfire and Jetstorm will be released in an Animated Entertainment Pack before the end of the year.

A stub in Transformers Wikia has been prepared to fill up the tech-specs of the soon to be made public figure. Animated Safeguard is not to be confused with Cybertron Vector Prime's partner, the little minicon Safeguard.

The share the same name but no resemblance in terms of colour scheme, transformation, allegiance and physical appearance. 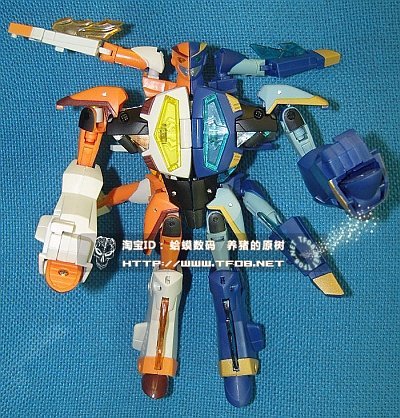 In contrary, Jetstorm has been made a good guy in Animated series where in past 'alternate' universes, Jetstorm has always been a baddie. He is due before Christmas.