Close Up Of Track Battle Roadbuster

Intels from Robot Kingdom via Tformers had informed them that there will be some in-package shots of the upcoming Transformers Dark of the Moon Track Battle Roadbuster that can pre-ordered immediately.

Now is no more mystery that this orange repaint that was revealed earlier now has a name and he will be out on 1st Sept, 2011.

His bio says:
“Supercharged and ready for action, ROADBUSTER is itching to try out his newest weapon against any DECEPTICON dumb enough to show his face. The AUTOBOT tinkerer has souped up his engine, boosted the output of his cannons, and reinforced his armor in anticipation of the next big battle. He can`t wait!” 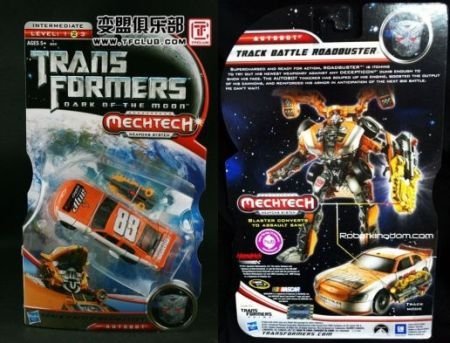 Track Battle Roadbuster - in package and close up

What is different between Track Battle Roadbuster and the standard Roadbuster is the decals. He comes with an Amp Energy Relaunch as the sponsor decal instead of the regular Amp Energy decal. The other aspects of him remained the same – NASCAR Sprint Cup Chevy Impala stock car with spring-loaded blaster weapons with flip-out “chainsaw” blades, three mechtech ports, back-mounted missile pods and swivel down wheels.

Roadbuster fans might consider him orangey but awesome. Get yours in Wal-mart.
-Tformers