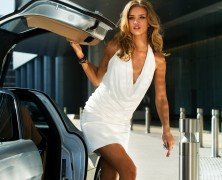 Rosie Transforms Back To Modelling

Filming ended and premieres attended. Rosie’s acting debut in this year’s summer block buster, Transformers 3, may have got mixed reviews from the critics, but there is no doubting Rosie Huntington’s modelling prowess.

The 24-year old beauty from Devon, England looked absolutely stunning as she stripped down to model for a couple of photographs for the swimwear firm, Al-Yidiz.

In one of the photo’s, Rosie is wearing an orange bikini which is held together with golden rings.

In another snapshot, she flaunts an animal print, blue and white two-piece, and in the last, Rosie dons a striking corset-style black swimsuit.

Rosie was a surprise choice as the replacement for Megan Fox in Michael Bay’s movie, Transformers 3.

Speaking at the premier of his movie in Shanghai, Michael explained his decision, “I wanted someone new, fresh, and different. Basically, the relationship was boy meets girl in the first movie.

The second movie, the boy has the girl. The third movie, they are 22-years-old. Do they get married and have kids at 22? So we decided to get a new girl.”