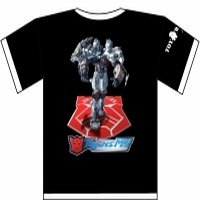 The much awaited TransMY official t-shirt is now officially announced. The t-shirt, which was one of the most anticipated surprises will be distributed before the gathering so that each attending member could wear them to the gathering.

Our initial plan of having them distributed during the gathering was later scrapped off due to majority’s request. Check out the designs;

The official T-Shirt comes in two flavours – the ‘bad’ and the ‘good. The shirt will be distributed randomly regardless of faction.

Therefore, you will get either the ‘bad’ one or the ‘good’ faction. If you wish to get the second pair, there would be some extra charges incur.

Enough of words, lets check out the shirts!

Special thanks: Tigatron (Kok Hoong) for the t-shirt & logo design.