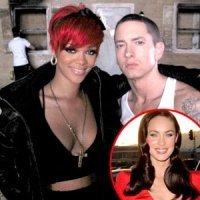 Megan Fox will reportedly star in Eminem and Rihanna’s video for new track, Love The Way You Lie.

The ex-Transformers actress is rumoured to be appearing alongside Lost actor Dominic Monaghan in the promo for the single, which is already sitting pretty in the charts at number 2 despite not being officially released.

Sources claim that newlywed Fox and Mongahan will star in a ‘steamy love scene’ which ‘gets really intense,’ for Eminem’s latest offering.

Due to popular demand and the tracks chart success, Em and RiRi are said to be shooting their scenes for ‘an emergency video’ this week, with Megan and Monagahan expected to add to the promo later in LA.

Director Joseph Kahn, who has previously directed Eminem’s promos for Without Me and We Made You is thought to be helping Em out with Love The Way You Lie video, but did not name names in his post on Twitter.

Kahn tweeted: “Got off a call. Emergency music video. Gonna write and turn in treatment in three hours to shoot asap.”

Joseph, who is fresh from directing Kylie Minogue’s latest video for comeback track, All The Lovers apparently wrote the script for Eminem’s latest Recovery release in just 45 minutes.