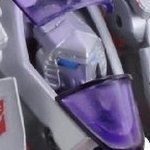 Air Raid is a redeco and slight retool of Revenge of the Fallen Thrust, adding MechTech ports to his arm/top of the jet and the undersides of his wings. He transforms into approximation of an F-35 Lightning II/Joint Strike Fighter and has a non-firing cannon with rotating barrel on his right arm, activated by a gear-wheel embedded in his forearm.

His Mech Alive gimmick is located in his upper arms; turning his forearms makes the machinery inside his biceps turn in time. Air Raid’s MechTech Blaster weapon is a retool of Topspin’s, replacing the claws with two halves of a barrel, which form the “Shot Cannon”. Thus far, this toy is only available in Japan.

Air Raid comes packed with a character card and an accompanying transparent plastic card of his MechTech weapon for the MechTech Wars online game. TakaraTomy’s stock photos of Air Raid (shown on this page) don’t show the MechTech ports under his wings.

Transformers Dark Of The Moon: A Review by FMT