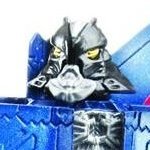 Thundercracker is a redeco of Dark of the Moon MechTech Deluxe Starscream. His incredibly flexible arms have joints at the shoulder, in the middle of the upper arm, elbow, and wrist, allowing them to neatly fold up for transformation, as well as scratch his own back.

He comes with a redecoed version of Roadbuster’s MechTech weapon, and one of Starscream’s MechTech Null Ray Cannon/Sword weapons. Oddly, his packaging and stock photos only depict him with the Saw weapon, and don’t acknowledge the Cannon/Sword.