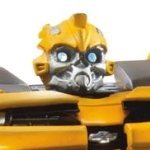 Bumblebee is an entirely new figure that resembles in many ways the 2010 toyline Battle Blade Bumblebee. In addition to the cosmetic changes made to the vehicle mode and robot mode to resemble the third movie’s altered visual design, this Bumblebee also comes with a MechTech weapon.

When a lever is pulled back on the “Blaster” weapon, it opens up into a larger “Plasma Cannon”, but it springs back into its original position once the lever is left alone. The MechTech weapon can be held in his hands, attach via 5mm pegholes/MechTech ports on his forearms, or plug in a “concealed” 5mm peghole on the vehicle mode’s roof. Additionally, C joint bars are sculpted into Bumblebee’s forearms.

His upper waist that connected on the crotch have been misplaced backward from what it supposed to be, this error can be fixed by unpegging the upper waist from the ball-joint & then switching those pieces on to each other leg, by doing this it will not only making the Bumblebee much accurate to the CG but also can make the roof on the car mode neatly closed.

Bumblebee can form a semi-Stealth Force configuration by lifting up the rear half of his roof, exposing concealed cannons sculpted in translucent blue plastic. Also of note in vehicle mode is the sculpted Camaro SS badging near the doors, which doesn’t appear on any other Dark of the Moon Bumblebee toy or the prop vehicles used for filming.