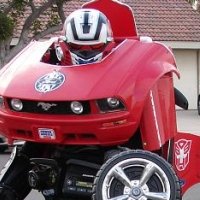 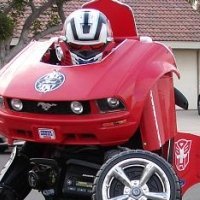 This is the man who has turned himself into a real life Transformer – by creating a fully functional Autobot costume out of a children’s toy. The must-have gadget for any die-hard Transformer fan was the brainchild of Californian Drew Beaumier.

He’s already wowed the judges on American Idol and now he’s created the crazy costume in his garage armed with just a beginner’s tool box.

It took eight weeks of constant trial and error to piece it together using a second-hand Power Wheels car to form the body and spare parts as well as glue bought at WalMart.

Transformer fanatic Drew then ripped the children’s car apart leaving him with each separate section. He then meticulously pieced the parts back together with hinges and glued it to a sports undergarment so he could wear it like a suit. The robot costume comes complete with wheels attached to his arms and legs so he can fold down into a car and roll along.

But when he stands up, the costume springs back out into the superhero pose famed by Optimus Prime and Co. The part-time bar tender has now taken to re-enacting famous scenes from the Transformer series along Hollywood and Sunset Boulevard.

And his street performances have already paid off the $300 he spent making his crazy creation after eager tourists began tipping him to have photos taken next to the real-life action hero.

Drew, 25, said: ‘I’ve always been a big Transformers fan ever since I was a tiny kid. I remember I was struggling for money, working a few rubbish bar jobs and then it hit me – make a Transformer costume and go and entertain all the tourists. 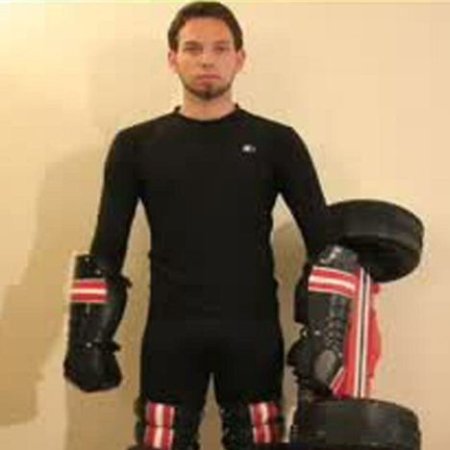 ‘But the idea never really got off the ground until a few years after the idea first came to me.

‘It was only when a good condition Power Wheels car was advertised for sale that I snapped it up and began making it.

‘Within two months I had a prototype built and fully working.

‘I’ve since won a big cash prize contest every Hallowe’en for three years now which has helped pay it off and after I started entertaining the crowds in Hollywood I earned enough to buy more Power Wheels cars and make new ones.’

So far the Transformer nut has made a Ford Mustang, Red Harley Davidson, Police Motorbike, Yellow Volkswagen Beetle and a pink Escalade, with an Iron Man replica in the pipeline.

And after being inundated with Facebook messages from adoring female fans, Drew revealed that his new ‘wheels’ have become a babe magnet.

He said: ‘I’ve been contacted by quite a few women on Facebook since I wore the costume on American Idol. 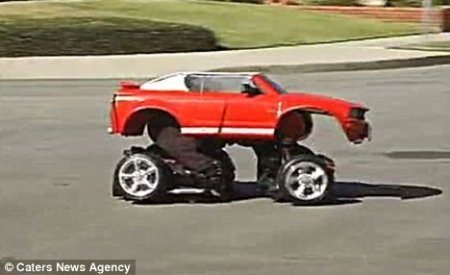 ‘None have gone as far as propose to me yet, but I can confirm that the chicks definitely find Transformers sexy.’

British fans of the legendary series shouldn’t have to wait too long to get their hands on one, with Drew planning to roll out the costumes to mail order buyers by Christmas 2012.

Drew, from Fountain Valley, USA, added: ‘I’ve been getting emails and messages on Facebook from people all over the world wanting to buy one off me.

‘Lots of them have been from the UK, but my business agent is currently crunching the numbers, so I’m hoping to start mass producing them at an affordable price soon.’