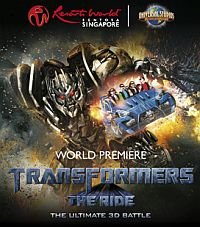 Visual Effects Behind Transformers: The Ride

Transformers The Ride enlisted the award-winning Industrial Light & Magic (ILM), a division of Lucasfilm Ltd., which created the visual effects for the movie franchise, to produce ground-breaking visionary special effects and 3-D images exclusively for the ride.

ILM has worked on nearly 300 feature films since its formation in 1975, including the TRANSFORMERS movies, Harry Potter, Jurassic Park as well as all four of the Indiana Jones films and all six of the Star Wars episodes. 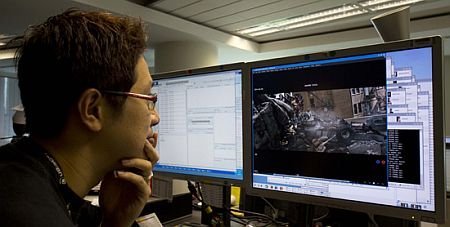 ILM Singapore started in 2006 and has worked as a integrated unit with ILM San Francisco on such projects as the TRANSFORMERS franchise, Star Trek, Terminator: Salvation, Harry Potter and the Half Blood Prince.

We found out more about the attraction from Jeff White, visual effects supervisor at ILM.

Did the team that worked on the ride also work on the movies?
One of the things that make TRANSFORMERS The Ride unique is the close collaboration that was possible by being in production at the same time as TRANSFORMERS: Dark of the Moon. Artists that had worked on the movie and understood its style also contributed to the ride.

Can you take us through the process of creating 30-seconds of ride media that guests would eventually see on screen?
In many ways, creating the media for TRANSFORMERS The Ride built upon the pipeline we have developed for the film’s visual effects but for this project there were a few added twists and challenges.

The screens on this project were so large and immersive they required us to render at 8k, four times the resolution that we normally render at.

The process began with a lengthy pre-visualization phase where we collaborated with Universal Creative and creative consultant to work out the main beats of the story that would take us through the ride, all with a focus on making it the best interactive guest experience possible.

We then used a combination of photography from Chicago and completely digital environments to create the backdrops for the action and seamlessly integrated it into the practical sets. Following which was a lengthy and complicated animation process where we worked out the timing of the characters actions and how they interacted with the cameras to make sure it provided the best experience on the motion simulator.

Finally, we added lighting and fx simulation for all the dust, papers, explosions and debris to make sure it felt like the films.

What are the advantages of working on this project simultaneously in the U.S. and Singapore?

The Singapore division of ILM did almost all of the work on the pre-show media as the guests enter the facility. They are an extension of our facility and were able to use the same assets, rendering and compositing tools we do in the US.

Additionally, since they are where the ride was being installed, they were an invaluable resource to interface with the Universal Studios Singapore to get any information and data that we needed as it was being built.

Were there any unique factors that you encountered in the development of the ride film that stood out as something you’ve never before experienced?

There were many unique challenges but I feel the process of working with curved immersive screens, stereo and always needing to distort the image to take the riders point of view into account were the things that really set it apart from the typically movie visual effects that we do.

Yes, the largest of which is that instead of a flat screen we had 12 different screens in various shapes and sizes. The most complicated were the torus screens which were completely immersive and required rendering a 180-degree field of view.

Also, each shot on the ride had to take the viewers angle on the screen into account so that as they approached the screen the perspective feels natural.

This required complicated camera blending from the moving ride into our virtual world and we worked very closely with the motion programmer at Universal to make sure it was a seamless blend.

What is the biggest difference in producing in 3-D versus 2-D?

All the tricks and cheats that work fine in 2-D visual effect production fall apart when creating stereoscopic work.

It is very important on a project like this that we create a deep immersive environment but that it also feels comfortable to the guest and doesn’t cause eye strain or headaches. 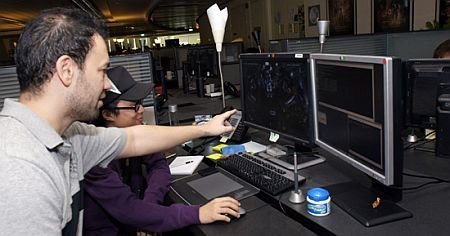 We spent a lot of time balancing contrast levels, atmospheric hazing and stereo depth to create a rich stereo environment.

Tell us more about the creation of the new AUTOBOT, EVAC.

EVAC is the AUTOBOT that we team up with for the ride. It is always a great and exciting experience, getting to create a new personality for the TRANSFORMERS universe, and hopefully one that the guests connect with.