The In & Outs of Transformers Cybertron 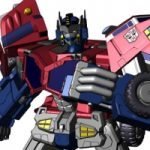 Some guide of what Transformers Cybertron going to be like:

In the new series, OPTIMUS PRIME and the AUTOBOTS face the greatest danger in all eternity, a menace that threatens not only the survival of the TRANSFORMERS, but the very existence of CYBERTRON, the home of the TRANSFORMERS race, and the universe itself. This next installment is “more than meets the eye” with a complex story of intrigue and surprises, and a reminder to fans what it means to be “ROBOTS IN DISGUISE”!

The stage of the Transformers battles are various planets in the universe. A black hole which appears at the end of an intense Transformers battle and others fighting begins to be swallowed by a star & the universe has met the crisis of its disappearance/destruction. The Cybertron forces of justice is led by Optimus Prime. While in order to protect the entire universe, they encounter the inhabitants of various planets, the evil forces of Megatron unfolds a fight.

The Supreme Commander of the Cybertronians, who is the first at the scene and fights to the end. To his subordinates, he is also an extremely warm-hearted leader which they can depend on and also his pliability which they have taken in their opinions positively.

He is sincere & is a vice-commander whose reliance is also thick. He is also a realist who can clearly advocate objections from a clear point of view to make difficult judgments & simultaneously manages the given command exactly when iti is given. At the time of the Earth migration, he proposed disguising himself so not to disturb the Earth governments.

The youngest warrior & fastest at speeds like the wind. His confidence is superfluously raw, and he is unyielding & he is not effective at self-control. Although he respects Optimus Prime, who is the commander & dreams of the future, he severely dislike the treatment he receives preaching of sermons that he is an inexperienced/immature Transformer.

A veteran fighter with abundant experience. Although as tough as his appearance shows, he excels in the way to survive on the battlefield, his thoughts of peace is stronger than others. He is a owner of a sincere & sturdy soul, and considers it to be his mission to protect the Earth people with his strength.

Though short in stature, he is proud of his marvelous strength,a powerful fighting faction warrior. Rather than words, action is respected and he also bravely fights against a formidable opponent. Although he is entrusted in heavy labor in many cases, originally he is not of low intelligence, feels dissatisfaction not to be made the fool.

Operator of a grumbling store. Although he has outstanding analytical capabilities, he does not have the self-confidence and is nervous and a worrier. Though intellectual, his eccentric character manifests by a masochistic dark humor.

Ancient Transformer who has continued to supervise and watch space and time from far ancient times, which is why he is called “Ancient.” In order to prevent the crisis of all the universes, he appears before Optimus Prime and appeals for the recovery of the planet’s force. Although both are considered as Cybertronian or Autobot, he is without there being a singularity of a family line and being able to meld into a team.

Small Transformers with many mysteries accompanying Vector Prime. They are full of curiosity and enjoy interaction with the children. Their information of Earth is promptly absorbed through the INTERNET.

The worst enemy of the universe, the great destructive emperor of the Decepticons. He is a triple changer who has the ability to change into car mode and jet mode.

Although he participates as the faithful arm of Megatron, he is anambitions individual whose vigilant eye targets the seat of the great emperor. He excels in both martial/military arts & resources & speed especially in vehicle mode is proud at the top class even in all Transformers. He resemble War Within Starscream.

The meal of three times compared to his punk existence who likes to fight. He is moved by the command of Megatron and Starscream. Although his abilities are immature, his excessive raw being and aggressive desire heightens the morale of the whole Decepticon Supremacy

A proud 14 year old boy who is proficient in repairs and reconstruction of mechanisms. Under the influence of his father who was a racer, motor crossing has become his hobby. He is vigorous and a cheerful character, but in secret, he worries about the comparison with the excellent records of his older brother and has thoughts of wanting to be accepted/recognized by his father is strongly above necessity.

He is the 11 year old younger brother of Kobe. He loves to watch “B” movies of Sci-Fi, Kung Fu and crime, and imitates them well. Although his wild way of thinking is shocking, it invites humor, which occasionally has even saved him in time of crisis. His communication with the Mini-Cons is possible without intentionally knowing why.

This 14 year old city girl is taken to the country by her parents who has a taste for the outdoors. Although it is a harsh place, she stubbornly continues her city lifestyle, she cannot adhere to phenomenon that much, but her different sense of values can be accepted.

The titles of the first 3 episodes that was already planned for airing was Sacred, Encounter, and Protection