The business graduate is currently making waves in the local and international toy scene by creating customised versions of Transformers toys.

Other than giving the models a paint job, other aspects she fiddles with are the aesthetic appearance of the hands, as well as adding accessories like shields.

Only recently becoming a fan of the series after the release of the Transformers movie in 2007, she has been customising for a year, with help from her boyfriend, Mr Syed Muzaffar, 26, who is in the fitness line.

'At first, we started customising because of our love for Transformers, and not so much about the money. We never expected all of this to happen,' she said.

With the help of the Internet, and support from noted US toy customisers like Mr Michael Morgan of Action Figure Customs, and Mr Michael Accardi (also known as Frenzy Rumble), Ms Ng has built a name for herself in the international custom Transformers scene.

The six-inch models she works on a regular basis cost about $20 from retailers.

But after going through her precision customisation, the toys usually fetch US$360 after a seven-day period of bidding. 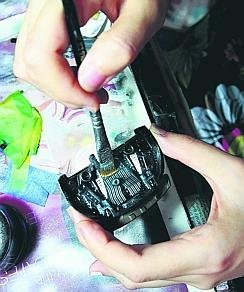 Despite the lucrative returns, Transformers customisation – which she describes as an 'excellent hobby'- is not what she intends to do on a permanent basis.

'I do want to find a job in human resources, making use of my degree, but the job market isn't too good right now, so I'll be doing this for the time being,' she said.

He owns one of Ms Ng's work – Hearts of Steel Optimus Prime – and another two are on the way.

'I bought something I really liked, and even though I paid a certain sum for the work, it's really worth it,' he explained.

'They are not something I can get from the manufacturer.'

Ms Ng is currently collaborating with Mr Accardi, an established combiner – the art of combining parts of various Transformers – from the US.

When asked about why he chose to work with Ms Ng, he said: 'She has a great eye for detail and her painting skills are top notch.

'I wouldn't trust my custom projects with anyone else.'

The collaboration piece will coincide with the launch of the second installation of the Transformers movie series due out in June 2009.

So it comes as no surprise that her one wish is 'to appear on Transformers 3 in 2011!'

Those who want to find out more about the custom Transformers, can visit Ms Ng's website .