Skalor's Postcard
Greetings from San Diego! Just got back today from deployment at sea on board the U.S. Navy carrier Stennis and thought I'd fill everyone in on what I experienced this past week with the ROTF cast and crew. It's true, filming did take place this past week, all shooting was completed in a two day span, Saturday the 1st with the IMAX folks filming flight operations, and Sunday the 2nd with Michael Bay in action around the ship. Rumors flew around for weeks about what exactly was going to happen with the movie so it was really cool to see it all go down.

Saturday afternoon two transport planes arrived, the first carrying Shia Labeouf on the first and on the second were Michael Bay, Tyrese Gibson, Megan Fox and Josh Duhamel. They arrived in costume (at least Tyrese and Josh did) and began working almost immediately. From what I saw, all of the filming with the cast was done in "closed" sets. 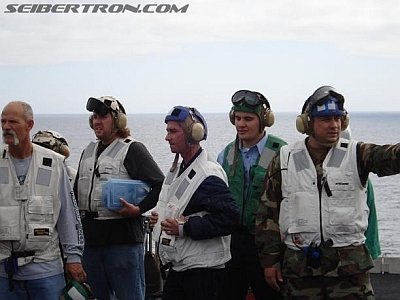 The rest of the filming on the flight deck seemed to be flight operations, of which I was there and will hopefully make the final cut. We were told to just act natural and continue our jobs as normal, which is easy to do when you've actually got work to do. I did however try really hard to get into one shot in which I just walked back and forth for about 20 minutes. 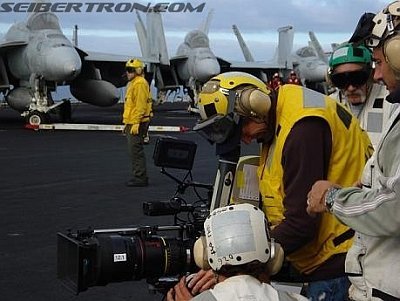 The whole experience was a lot of fun and everyone in the cast and crew were really cool. Shia Labeouf and Megan Fox were really hard to find on the ship, I think they were working just about their whole time there. I'm not sure which part of the movie was filmed there but it is probably somewhere toward the end, (Shia had "beat-up" make up on, and Duhamel and Tyrese were in dress uniforms). Overall it was an awesome time. 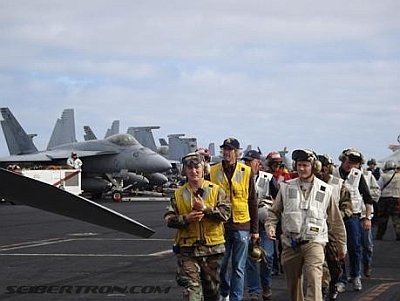 Sorry if I didn't give you any good spoilers or anything like that, but I think the suspense is more fun anyway. By the way, the crew working on this movie have been busting their asses to make a good film, that much I can attest to.

This should put to rest any of the rumors that they've completed filming for now, although this may have been the last of the filming (I didn't ask). Here are a few of the pictures I got during this past weekend, enjoy!