The new image shows us the back of what looks like the Sideswipe action figure card or some kind of print solicitation. Sadly, the strange look of the teaser image many hoped would be a movie still, has been exposed as one of Hasbro's photoshopped preview images.

None the less, this pic gives us a good look at the mold. However, count on the final production versions of the robot and alternate modes looking somewhat different.

What's just awesome is now we know that Sideswipe's alternate mode molded after the new Corvette concept looks farggin' great! Very clean and sleek with hardly any indication there's a bot inside. With any luck that will be maintained in the production version.

Sideswipe's robot mode is also very interesting. The legs and arms look to have good articulation. Hopefully he's not as top heavy as he looks. The design has managed the kibble factor well. 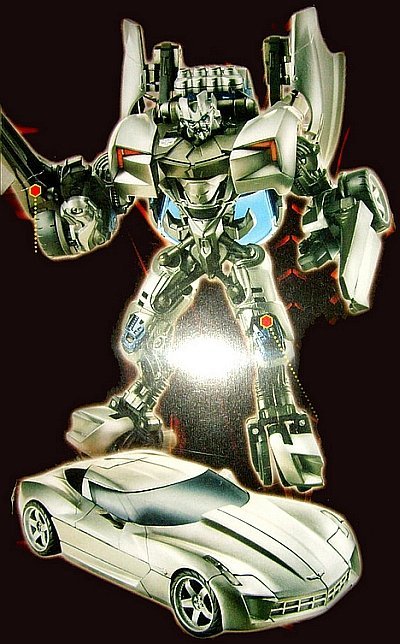 Using an Alternators trick that utilizes the rear bumper as feet is nice. However, it could be a real horror show from the back, so it's wait and see on that and that.